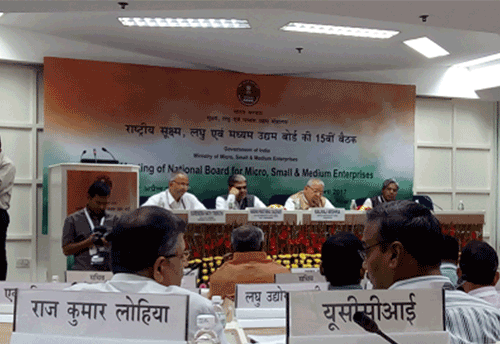 New Delhi, Apr 29 (KNN) The MSME Ministry and officials from various MSME bodies convened for the 15th Meeting of National Board for Micro, Small and Medium Enterprise on Thursday April 27th at Vigyan Bhawan in New Delhi.

The key takeaways observed from the meeting that were taken into consideration by the Ministry and the attending officials included an array of subjects.

MSMED Act to be amended soon

The Board observed that the MSMED is to be amended. This decision links up the debate that on what basis should MSMEs be defined. Shall there be a continuation of the ‘Investment ‘based definition or move onto the ‘turnover’ and/or ‘employment’ based criteria

To address the issues around the delayed payment, the MSEFCs are to be strengthened to avoid the delay in payments to MSMEs.

The board meeting observed that beside Central Departments and Government PSUs, autonomous bodies should also be included The amendments shall also include the imposition of penalties for misusing MSE category fraudulently. There were talks on developing standardized tender conditions. Also affirmative action such as limited tendering in order to support MSEs at E=Procurement portals such as GeM is suggested.

The launch of the portal and the mobile application during the board meeting was seen as an important tool to monitor delayed payments online. Also formation of a separate mobile app for online filing of delayed payment application is in consideration.  Absence of MSEFC committees in many states was reported

Revival and Rehabilitation framework for MSMEs

The Ministry informed that so far 41000 requests have been settled. Representatives from various industrial bodies raised there are no regular meetings of SLBC being held. The bodies also informed that banks deny complying with the RBI guidelines and in many cases bank do not work on a punctual timeline.

The members at the meeting lauded the Prabhat Kumar Committee report recommendation of institutionalizing Lead Banks for MSMEs.

U.P MSME Minister Pachouri requested the MSME ministry to formulate a scheme for traditional caste based craftsmen such as Ghumantu (Vagabond) iron smiths and gold smiths who may/ may not have permanent work space.

Also Rohit Patel, MSME Minister from Gujarat highlighted the need to synchronize the schemes for MSME at the Centre and the State Level.  He informed the board that the state of Gujarat provides special incentives for MSMEs. The State also provides Capital Investment Subsidy and Interest Subvention Subsidy to accelerate the growth of the MSMEs

The Board meeting was chaired by Karlaj Mishra, Union MSME Minister. Also Haribhai Parthibhai Chaudhary, MoS MSME and other officials from the ministry were present.