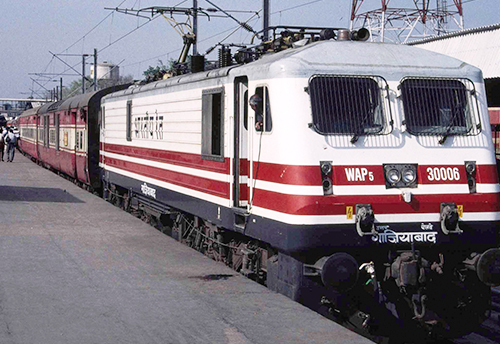 New Delhi, June 13 (KNN) Indian Railways, which purchases goods worth Rs 2 lakh crore annually from both big as well as small sector, is planning to take its procurement from MSMEs beyond present 20 per cent.

There has been a consistent call for Public procurement in India to be opened up in a fair manner to ensure greater competition.

Public procurement (procurement by government/its agencies for their own consumption and not for commercial resale) in India is estimated to be about 30% of the country's GDP, with sectors such as defence, railways and telecom — having state-owned enterprises — accounting for a major portion of it.

The Principal Secretary of Railway Ministry conducted a meeting with the members of Railway Board and few entrepreneurs to discuss ways to improve procurement by Railways.

One of the entrepreneurs present at the meeting, Naveen Jain, Chairman, Dayachand Engineering, told KNN, “The meeting was very constructive as the discussions were initiated with the recommendation of the Minister himself.”

He said, “Procurement related issues, loopholes in tendering process, payment processes and vendor development programmes were discussed in the meeting.”

The public procurement policy mandates the PSU/ Central Ministries/ Departments to procure minimum of 20 per cent of products and services from Micro and Small Enterprises (MSEs). In tenders, participating MSEs quoting a price within price band of L1+15% shall be allowed to supply a portion of the requirement by bringing down their price to L1 price is from someone other than a MSE and such MSEs can be together ordered up to 20 per cent of the total tendered value.

Jain said during the meeting the officials said Railway is willing to increase the procurement percentage to more than double of what it is now.

Currently, Railways purchases 20,000 items from the industry overall and the list of items will soon be available online.

Stress was given on discussions over payment process/ receipt note process as the industry is demanding to make the process online.

Apart from this, entry level barriers to become a Railway vendor were discussed.

The officials pointed that part 1 and part 2 vendor schemes of Railways has been done away with. Also, the vendors already registered with NSIC are no longer required to register separately for Railway tenders, Jain said.

Discussions on tender related issues were also done. The entrepreneurs sought more transparency in the Railway tenders as in the recent past many cases of tenders being cancelled at the last moments, non-qualification for tender even after fulfilling requirement, tweaked tender documents etc have come up.

The officials assured to take up the matter immediately with the Minister and initiate work in this regard. (KNN Bureau)