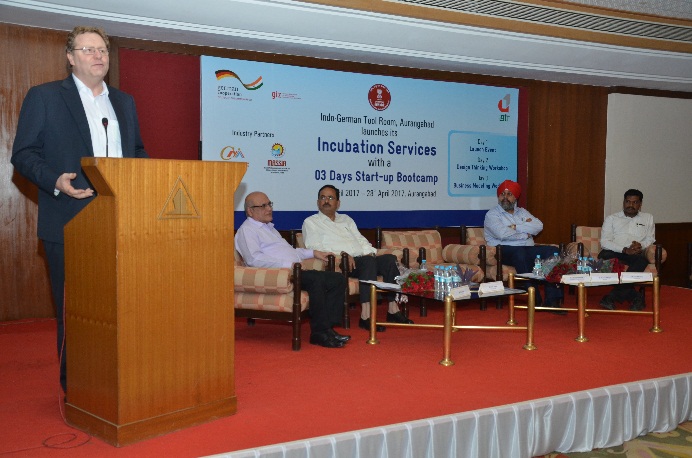 Aurangabad, Apr 27 (KNN) Given the importance of start-ups for industrial and economic growth, the MSME Technology Center – Indo German Tool Room (IGTR) Aurangabad launched its incubation services in the city on Wednesday.

The inauguration was followed by a 3-day start-up bootcamp. The bootcamp was organized by IGTR within the framework of the Indo-German Bilateral Cooperation programme on “Innovation Promotion in MSMEs” being implemented by GIZ and office of DC-MSME, MoMSME, Government of India.

The launch event was also organised in partnership with the Chamber of Marathwada Industries & Agriculture (CMIA) and the Marathwada Association of Small Scale Industries (MASSIA).

As many as 150 start-ups applied to be part of the bootcamp out of which the 17 most innovative ideas were selected. The bootcamp kicked off with an inauguration session to officially launch the incubation center @ IGTR. 140 participants from industry, government and academia joined the launch event.

Chief Guest Wolfgang Leidig, Programme Director, GIZ together with the Managing Director of IGTR, H.D. Kapse, officially launched the incubator during the event.

Kapse gave the welcome address by outlining IGTR’s excellent infrastructure which will be open for start-ups.

He also mentioned that Maharashtra although having the highest GDP in India, is considerably lacking behind in the number of incubators.

Gurpreet Bagga, during his opening remarks emphasized that the industry would provide all the support for making the incubation center a success story in Aurangabad.

It was further highlighted by Sunil Kirdak, President MASSIA that “the incubation center would significantly contribute to closing the gap between industry and institutes such as IGTR”.

In the second half of the launch event the 17 start-ups pitched their ideas to the audience. Each start-up had 3 minutes to present their idea and get feedback. The ideas presented during the pitch ranged from micro generators to low cost automation solutions. In the afternoon the 3 day bootcamp officially kicked off with the start-ups moving to the incubation space in IGTR to further work on their ideas with the help of tools such as design thinking and business modeling. Design thinking expert Moritz Gekeler and Kanu Mitra from Bosch DNA Start-up Programme supported the start-ups during the three days to rethink their ideas, identify problems and collaboratively work on them.

In the next step, the start-ups out of the bootcamp with a product viable for commercialization will be selected to further get support by IGTR and have access to IGTR’s state of-the-art facilities including sophisticated machines such as CNC Milling, EDM & Wire Cut machines, 3D scanning and printing. IGTR has dedicated a space and machinery as well as mentor support from industry for those start-ups.