Is Moradabad no longer the Brass City? 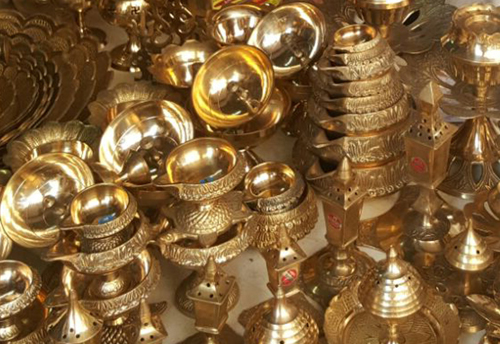 Is Moradabad no longer the Brass City?

Moradabad, Feb 9 (KNN) The brass city of India - Moradabad - is on the verge of losing its fame as the Brass City with the fading demand of the metal. The city, which was once the core hub for manufacturing as well as exporting brass wares, is now taking the aluminium route for its survival.

Citing several reasons for the falling demand, the city based manufacturers said that they are shifting from the brass wares to other metal based products.

Most of the manufacturers in Moradabad are mostly micro, small and medium enterprises.

Owner of Ahmed Handicraft Exports, who was once the most famous brass exporter from the city, said, “We are now shifting to manufacture other products rather than brass. The industry is dying due to high labour cost, steeply falling demand in the Indian as well as overseas market and no incentives from the government.

The manufacturer had no hope from the budget and wants to now do away with his family business of manufacturing brass items.

“We have now shifted to manufacturing other items. We have no hope from the budget,” he said.

Similar issues are being faced by the other MSMEs in the city too.

“We are facing high cost of production due to expensive raw materials for brass based items. The metal’s cost has been rising tremendously resulting in less demand for the item,” Mahesh Chandra, Owner of Malac Impex, a brass-based manufacturing unit told KNN.

Elaborating further, the manufacturer said that the number of artists designing and creating the brass items has declines drastically mainly because the manufactures are unable to pay them the high labour costs.

It may be recalled that earlier, the brass items were available at very nominal costs in the local gift shops. It was considered to be the first choice for gifting on any occasion. Not only in India, has the demand for brass products have declined in the overseas market as well.

The significant fall in the demand of brass items followed by high cost of production has forced the manufacturers to manufacture aluminium and steel products which are comparatively affordable and in demand.

Vamil Malhotra from Ranu Exporters pointed that earlier they used to export 80 per cent of brass based products to Europe and USA, which has now shrinked to merely 20 per cent.

The industry said that they are waiting for the attention from the government to save the traditional sector.

Malhotra also said that despite being a SEZ, the sector is getting no help from the government on the issues such as high cost of electricity, excise duty, service tax and more.

Another exporter from the city, Nraesh Katya of Bakson Exporters told KNN that the cost of brass items in the overseas market is very high, while the cost of aluminium and steel items are almost half of brass items. “The consumers now prefer other metals rather than the expensive brass items,” he said. (KNN Bureau)