Economic growth won’t come to SA from America or Europe; it needs political will, determination of SAARC countries: Kant 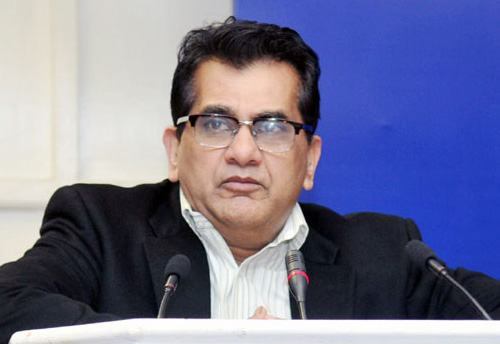 Economic growth won’t come to SA from America or Europe; it needs political will, determination of SAARC countries: Kant

New Delhi, July 2 (KNN) Lack of intra-regional trade has “severely hampered” the economic development of South Asia, opined NITI Aayog CEO Amitabh Kant stating that economic growth will not come to South Asia from America or Europe and it will need political will and determination of SAARC countries, which will enable growth to take place and also eliminate poverty.

Addressing the SAARC Development Fund (SDF) Partnership Conclave 2018 here today, Kant stressed on the need for a greater push to investments, travel and tourism in the region.

"Politicians may say anything and politics of the region may do anything but South Asia as a region has been severely hampered and it will remain backward till we don't integrate and till we don't push for greater trade, greater investments and greater travel and tourism within the region," he said.

Stating that SAARC countries have not been able to work together in the region, Kant said "we have nobody to blame but ourselves".

The NITI Aayog CEO stressed that SAARC countries should allow greater trade and investment to take place within the region.

He added, "If you look at intra-regional trade, there is virtually no trade taking place in the SAARC region. There is no intra-regional travel and tourism therefore multiplier impact of trade within the region has not benefited the SAARC countries."

"Why Indian tourists are going to Thailand, Singapore, and Malaysia. Why they can't travel to Bhutan, Pakistan, or Afghanistan," he underlined.