Country loses Rs. 750 billion every year due to road accidents 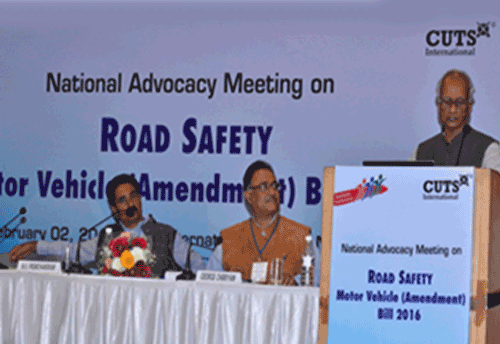 Country loses Rs. 750 billion every year due to road accidents

New Delhi, Feb 3 (KNN) Many international best practices have been incorporated in the Motor Vehicle (Amendment) Bill 2016 and the much awaited bill is expected to be presented in the Parliament in the second half of the ongoing budget session, said Abhay Damle, Joint Secretary (Transport), Ministry of Road Transport and Highways, Government of India speaking at a national advocacy meeting.

The one point agenda of the meeting was to advocate for the early enactment of the Motor Vehicle (Amendment) Bill, 2016. About 100 participants representing more than 20 states consisted of Consumer Activists, representatives from organizations working on Road Safety, legal experts, transport engineers, traffic police and other stakeholders attended the meeting.

On this occasion, a booklet on ‘Guide to Buying Safer Car’ also was released by the by the Chief Guests. Addressing to the session Damle highlighted various provisions of the bill and said that there are all provisions to address road safety issues. In response to the queries raised by activists Damle said that he will take into consideration the suggestions provided regarding mandatory ISI marked helmets and installing speed governors at the time of vehicle manufacturing.

George Cheriyan, Director, CUTS International in his opening remarks highlighted that while India has only 2% of motor vehicles population, however it accounts for more than 10% of road accidents of the world which results in on an average more than 400 people dying each day on Indian roads.  He also said, as per media reports, 1682 times more people died in roads in India in 2015, than the people died in terrorist strikes. He advocated for the changes we can make by educating the people and maintaining the discipline on the road.

Dr. Jain citing his own experience as an accident victim shared that there are mainly two constituents of a road accident, first is the road, upkeep of which is the duty of the government  and other being the vehicle, maintaining of which is the duty of the owner/user of the vehicle. Comparing the anatomy of the human body with that of a motor vehicle, he appealed to the vehicle owners to keep the Engine, Clutch and Gear (ECG) in right condition. He also urged that educating the drivers is must in order to reduce the accidents.

Dr. P. K. Sarkar continued the session and gave his views on road safety comparing the India’s state with some other countries and citing the initiatives taken by Japan, Sweden and other countries in substantially reducing the road fatalities urged to have concrete actions in tackling with the menace.

S.B. Tragi, IPS,  Additional Commissioner (Traffic) stated that people are educated but have no concerns for the Vulnerable Road Users. He insisted that nothing works better than enforcement. Further he said that in addition to engineering, safety and licensing provisions, we need to enforce the law strictly only which can bring substantial and visible changes.

N. K. Premachandran, MP, LS speaking in the session on ‘Lawmakers’ perspective on Road Safety’ said that there is an urgent need for passage of the bill but needs elaborate discussions on the same. Taking the discussion forward he said that it should also be the duty of the government to bear the penalty if the accidents are caused due to defaults in roads. Mr Premachandran stated that the Country loses Rs. 750 billion every year because of the road accidents.

Rangasayee Ramakrishana, MP Rajya Sabha and member of Parliamentary Standing Committee on Transport said that a board should be formed on National Road Safety to ensure the participation of states on law making. (Press Release/CUTS Intl)