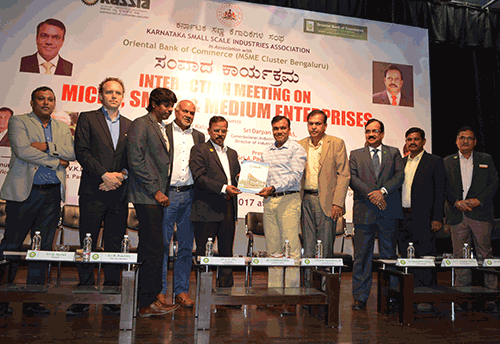 KASSIA facilitated an interactive meeting between state MSMEs and the state MSME Secretary.

The Memorandum was submitted by A, Padmanabha, President, KASSIA during the interaction meeting held at KASSIA with Rajendra Kumar Kataria, Secretary, (MSME, Mines) Government of Karnataka.

“Often, local SMEs are ignored in favour of companies outside the State and in spite of number of representations things have not improved.  This must be looked into with a view to encourage State enterprise by ensuring that the Public Procurement Policy is implemented strictly,” KASSIA said.

On Trade License, KASSIA said for trade license, which though exempted for MSMEs in Municipal Corporation and Municipality areas, MSMEs are still harassed by the BBMP and other functionaries.

On Land Allotments, the industry body said long pending issues concerning allotment of plots by the KSSIDC in many cases have been pending for long.

Presently, KIADB is empowered to acquire land and hand over to KSSIDC for the benefit of MSMEs.  This results in increase costs which are passed on to the allottees.

Therefore, the KSSIDC must be permitted to acquire  land on their own for creating industrial area for MSMEs in the State  which may be done under Sec.109. Then the cost of land becomes a little more economical and affordable for SMEs.

Kassia thanked the Government for the financial support given to the KSSIDC last year of up to Rs.60 crores for creating infrastructure in the industrial estates.

It said, “This has been very helpful.  However as infrastructure still needs to be strengthened the Government must allot atleast Rs.100 crores to the Corporation for them to create required infrastructure in the industrial estates.”

On Property Tax in Rural Areas on Industry, KASSIA said in the rural areas and Panchayat limits local bodies tend to levy property tax which is often  much higher than what is charged on industry in the BBMP limits.

“This is simply unacceptable as the value of land and facilities provided in those areas is much lower and less costly as compared to the City. This must be immediately addressed so that SMEs are established in the rural areas with necessary investments by entrepreneurs,” it said.