Soft loan to sugar mills to facilitate payment of cane dues of farmers for the current sugar season 2014-15
New Delhi, Aug 12 (KNN) To further infuse liquidity into the sugar industry and facilitate clearing of cane dues arrears, the Cabinet Committee on Economic Affairs, chaired by the Prime Minister Narendra Modi, has approved a soft loan scheme to the extent of Rs 6000 crore for the current sugar season.

“This will ensure that farmers are paid their dues expeditiously,” said a Cabinet release.

The CCEA has further mandated that banks pass on the financial assistance directly to the cane growers after obtaining the list from the mills. Furthermore, in order to incentivize mills to clear their dues expeditiously, the government had earlier mandated that soft loans will be provided to only those units which have cleared at least 50 percent of their outstanding arrears by June 30, 2015.

The Government has provided one year moratorium on this loan, and will bear the interest subvention cost to the extent of Rs 600 crore for the said period, the Cabinet release added.

As a result of the above interventions, the cane price arrears are steadily reducing and presently stand at Rs 15,400 crore. To further liquidation of arrears and increase coverage of the soft loan scheme, the government has decided to extend the date of achieving eligibility under the soft loan scheme from June 30, 2015 to August 31, 2015.

Now mills are required to discharge 50 percent of cane dues payable by 31.8.2015 to become eligible for the loan. This will extend benefits to larger number of farmers by enabling more mills to avail the benefits of the scheme. It has also been decided that after clearing cane dues of farmers, subsequent balance, if any, will be credited into the mill accounts. This will benefit about 150 additional sugar mills which had proactively liquidated more than 90 percent of their cane dues payable. This would ensure that mills are incentivized for arranging bridge finances for timely clearance of cane dues to farmeRs

The Central Government has taken several steps to mitigate the situation by infusing liquidity into the sector. The export incentive on raw sugar has been increased from Rs 3200/MT to Rs 4000/MT. Funds have been allocated to support 14 lac MT (LMT) of raw sugar exports as against 7.5 LMT achieved last year.

Remunerative prices for Ethanol supplied for blending has been fixed. Prices have been increased to Rs 49 per liter, a substantial increase over previous yeaRs As a result, the supplies of ethanol for blending have increased from about 32 crore liters per year to 83 crore liters per annum. Excise duties on ethanol supplied for blending in the next sugar season has been waived, to further incentivize ethanol supplies for the blending program. This would further increase the ex-mill price of ethanol and help improve liquidity in the industry facilitating payment of cane price arrears

The Government had also increased import duty to 40 percent, abolished the Duty Free Import Authorization Scheme, to prevent possible leakages of sugar in the domestic markets. The Government has also reduced the export obligation period from 18 months to 6 months under the Advanced Authorization Scheme. These measures are intended to improve price sentiments. (KNN Bureau) 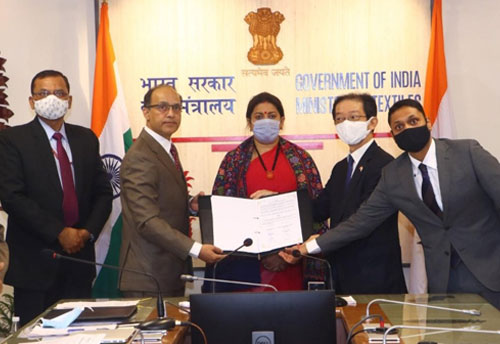