The history of indigenous printmaking 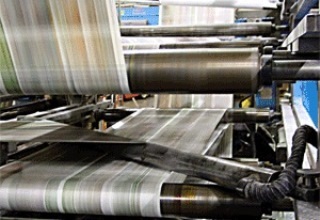 The history of indigenous printmaking
New Delhi, Sept 27 (KNN)  Prints are works of art which allow multiples in almost identical forms of the initial image. The history of printmaking in India from 1556 may be outlined as an era for this form of art, gaining prominence with the Portuguese bringing in the printing press to Goa.

If seen in the international context, this form of art started making its mark in India, almost a century after Gutenberg’s Bible. Noted artists such as Thomas Daniell (1749-1840) and William Daniell (1769-1837) made six volume series of aquatints titled as Oriental Scenery in India.  In 1786, the Daniells published an album of their monochrome etchings, Twelve Views of Calcutta.  This was the first time that the possibilities of single sheet printing were explored on a large scale in India. The first lithographic single sheet print was printed in 1822 by a French artist, De Savignac.

The demand for printed images for calendars, books and other publications grew in the 1870s which resulted in the increased popularity of single sheet display prints. Eventually, several art studios and printmaking presses flourished throughout India. Bat-tala, in the Shova Bazaar and Chitpur areas of Kolkata may be viewed as prominent centres for printmaking in the 19th century.

Munshi Newal Kishore founded the first press in Lucknow called Newal Kishore Press and Book Depot in 1858. It is recognised as one of the oldest printing and publishing establishments in Asia where the newspapers and books were often printed with stone blocks.   Apart from these, the other major centres were set up in Ghatkopar, Mumbai with Raja Ravi Varma, establishing a lithographic press towards the end of the 19th century. The Ravi Varma Press gained prominence with him copying many of his religious and secular paintings and printing them as oleographs for mass consumption.

During the second decade of the 20th century, a transformation of the role of printing as a creative medium was established by Abanindranath Tagore, Gaganendranath Tagore and Samarendranath Tagore. They collectively formulated the Bichitra Club to explore new forms of painting and printmaking with woodcuts and lithography.  Another prominent student of this club was Mukul Chandra Dey, who was taken to America by Rabindranath Tagore in 1916 to learn the technique of etching from James Blinding Slone.

Printmaking became popular in India during 1921 with Nandalal Bose introducing it to Kala Bhavan in Santiniketan. From his visit to China and Japan in 1924, he brought back Chinese rubbings and Japanese colour woodcut prints. Owing to this, the students of Kala Bhavana thus established a direct contact with original prints of the Far East. Benodebehari Mukherjee and Ramkinkar Baij experimented with this medium from the 1930s to 1940. Chittaprosad and Somnath Hore used linocuts and woodcuts to disseminate leftist ideologies, reformist concerns and socio-political critique of events like the Bengal Famine of 1943 and the Tebhaga movement.

Somnath Hore joined Santiniketan as the head of the department of graphic arts in the year 1969. With experimentation of diverse forms in this medium, the department became further enriched in the later years with the expertise of Sanat Kar, Lalu Prasad Shaw, Pulak Dutta, Nirmalendu Das, Ajit Seal, and Salil Sahani. Similarly in Delhi, Jagmohan Chopra (founder of the Group 8), J Swaminathan, Anupam Sud, Paramjeet Singh, Manjit Bawa and Krishan Ahuja also made sizeable contributions to this field.

With the establishment of printing press by Kanwal Krishna and Devyani Krishna in 1955, a renewed energy was instilled in Delhi, outlining techniques of multi-coloured intaglio and collagraphy.  Several young printmakers visited Paris to learn the technique of multi-coloured intaglio under the guidance of William Hayter (founder of the Atelier 17) and Krishna Reddy in early 1950.

K.G. Subramanyan effortlessly incorporated lithography, etching and serigraphy in his art practice. He transformed them into children’s book illustrations which were published during his stint as a teacher at the Maharaja Sayajirao University in Baroda.

Other prominent artists like N B Joglekar, Jyoti Bhatt, Jeram Patel, Shanti Dave, V R Patel, and P D Dhumal also made their important contributions in this field. After studying in Italy and at the Pratt Graphic Centre in New York, Jyoti Bhatt joined the art faculty in Baroda in the 1960s, encouraging young printmakers to experiment in this area of visual expression.

From 1970 onwards, iconic printmakers such as Laxma Goud, Devraj Dakoji and D L N Reddy in Hyderabad, R M Palaniappan and R B Bhaskaran in Chennai and Chittaprosad Bhattacharya, Atin Basak and Amitava Banerjee in Kolkata have made a significant mark in this area. The techniques of intaglio influenced  painters and sculptors in Baroda during this time including Dattatray Apte, Naina Dalal, Jayant Parikh, Vijay Bagodi, Walter D’souza and Rini Dhumal to name a few.

The works created by Robert Rauschenberg in Ahmedabad and the comprehensive collection of prints at NGMA, New Delhi reflect the diverse practices adopted by the printmakers all over the world, rendering it as one of the richest repositories of prints.