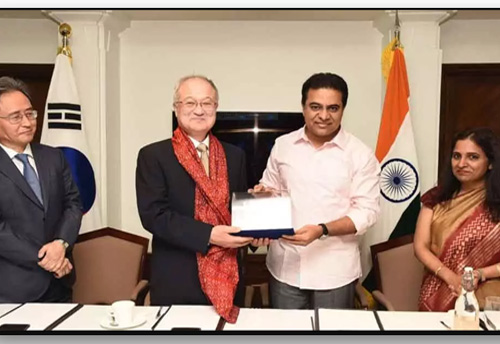 The Korean company on Wednesday signed the final agreement with the Telangana government in the presence of IT & Industries Minister K T Rama Rao, Indian Ambassador to Korea Sripriya Ranganathan and Korean Ambassador to India Shin Bongkil.

Youngone Corporation will set up its facility on 290 acres and the production will involve manufacturing of knitted and woven garments for outdoor wear and technical textile products, predominantly for export, an official release said.

Rama Rao welcomed Youngone Corporation and stated that this anchor investment is expected to catalyse more investments in KMTP as well as more Korean FDI in textile and other sectors in Telangana.

During the meeting, the heads of Youngone Corporation stated that Telangana state's industrial policies have encouraged them to invest in Telangana.

Youngone Corporation is a Korea headquartered leading manufacturer of textiles, technical outdoor, athletic apparel, sportswear, knitwear, footwear with annual revenues in excess of $1.75 billion has operations in 13 countries, including Bangladesh, Vietnam and Ethiopia.

Consul General of Korea in Hyderabad, Suresh Chukkapalli and Pricipal Secretary Jayesh Ranjan were present on the occasion.