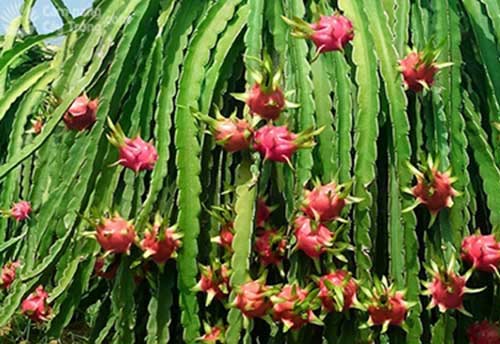 New Delhi, Aug 04 (KNN) Aiming to boost exports of exotic fruit, consignments of fiber & mineral-rich ‘dragon fruit’, which are sourced from farmers of Gujarat & West Bengal, have been exported for the first time to London, United Kingdom & Kingdom of Bahrain. In India, dragon fruit is also referred to as Kamalam.

“The consignment of exotic fruit exported to London was sourced from farmers of Kutch region and exported by APEDA registered packhouse in Bharuch, Gujarat, while the consignment of ‘dragon fruit’ exported to Kingdom of Bahrain was sourced from the farmers of West Midnapore (West Bengal) and exported by APEDA registered enterprises, Kolkata”, the government said in a statement.

Earlier in June 2021, a consignment of ‘dragon fruit’ that was sourced from the farmers of Tadasar village, Sangli district, Maharashtra was exported to Dubai by APEDA recognized exporter.

Production of ‘dragon fruit’ commenced in India in the early 1990s and it was grown as a home gardens. Due to high export value, the exotic ‘dragon fruit’ has become increasingly popular in recent years in the country and it has been taken up for cultivation by farmers in different states.

Scientifically referred to as Hylocereusundatus, the ‘dragon fruit’ is grown in countries such as Malaysia, Thailand, the Philippines, the USA and Vietnam and these countries are the major competitors for Indian Dragon Fruit.

The cultivation of dragon fruit requires less water and can be grown in various kinds of soils. The fruit contains fiber, vitamins, minerals, and antioxidants. It can help in repairing the cell damage caused by oxidative stress and reduce inflammation and also improve the digestive system. Since the fruit has spikes and petals resembling lotus, it is referred to as ‘Kamalam’.

Prime Minister Narendra Modi in ‘Mann Ki Baat’ programme in July 2020 on All India Radio had mentioned the dragon fruit farming in the arid Kutch region of Gujarat. He had congratulated the farmers of Kutch for the cultivation of fruit for ensuring India’s self-sufficiency in the production. His dream has come true when the fruit is being exported to the UK and the Kingdom of Bahrain.

APEDA is making efforts to export it to other European countries to get better price realisation to the farmers of their produce.

APEDA promotes exports of agricultural & processed food products by providing assistance to the exporters under various components such as Infrastructure Development, Quality Development and Market Development. Apart from this the Department of Commerce also supports exports through various schemes like Trade Infrastructure for Export Scheme, Market Access Initiative etc.