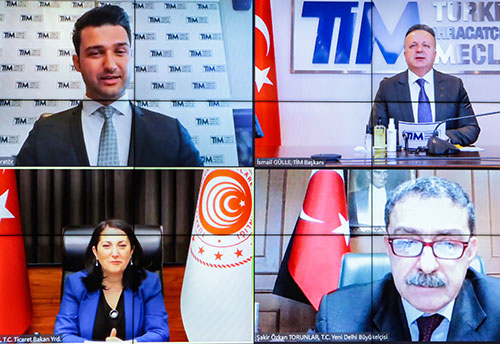 New Delhi, Apr 10 (KNN) Turkey is considering a major trade and economic partnership with India as in times of pandemic, they are focussing on virtual trade delegation programs to maintain engagement with India.

Turkish Exporters Assembly (TIM) apex body of exporters from Turkey recently concluded a virtual business mission with India to reduce the effects of COVID-19 on exports.

Stating that in 2020, Türkiye-India foreign trade volume reached 5.7 billion dollars, TİM Chairman İsmail Gülle said, “The Türkiye-India Comprehensive Economic Partnership Agreement (CEPA) was put into the agenda on early 2010s and initiatives started with the Joint Working Group. We believe that finalizing and implementing the agreement will have a strong impact on bilateral trade relations. In the January-February period, our exports to India increased by 9 per cent compared to the same period of last year to 173.4 million dollars.”

TİM Chairman İsmail Gülle stated that Türkiye sees India as a friendly country that is taking firm steps towards becoming a global power with its growing economy, wide market, military power, experience in space and information technology, rich human resources, long-established history, and cultural heritage. Reminding that diplomatic relations, established after India gained its independence in 1947, have come to present-day with strength.

“In the economic sphere, the Türkiye-India Joint Economic Committee, established in 1996, the joint committees on agriculture and tourism, the Double Taxation Prevention Agreement signed in 1996 and the Mutual Assistance Agreements signed in 2015 have been the main mechanisms that strengthen economic cooperation between the two countries,” he added.

He further said that Türkiye looks forward to stronger partnerships with India, which is expected to be the fifth-largest economy in the world in 2025 and the third largest in the world in 2030 adding, ''As the field workers of Türkiye's foreign trade, we want to make the best use of business opportunities in India within the framework of the win-win principle.''

Deputy Trade Minister Gonca Yılmaz Batur said that increasing the variety of products is important for both countries to further develop our commercial relations. She also said that India- Turkey Business Forum is being planned this year.

Turkish Ambassador to New Delhi, Şakir Özkan Torunlar who delivered a speech during the opening ceremony of the virtual delegation, said “Turkish exporters should concentrate on the products that the Indian market needs, instead of products that are being produced in India, and form partnerships with Indian companies.”