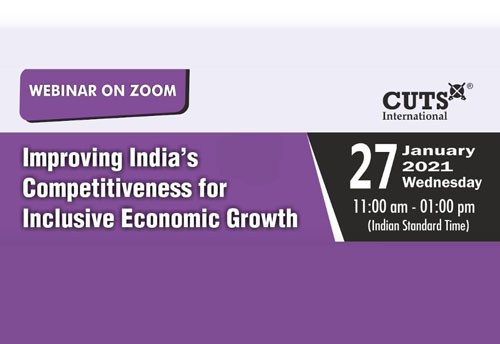 New Delhi, Jan 29 (KNN) CUTS International, Secretary General, Pradeep S Mehta highlighted the need to focus on various parameters of competitiveness in order to deliver on the promises of inclusive growth during a webinar on “Improving India’s Competitiveness for Inclusive Economic Growth.”

Some of these include investments in intangible assets, development of intra and inter-sectoral firm level cooperation, ensuring fair competition and enhancing capabilities of public institutions.

Of the two catalysts, Pritam Banerjee, independent Trade and Logistics Specialist, while summarising his presentation, which formed the basis of discussion in the webinar, pressed on the need to channelise efforts on the implementation front in order to translate the vision into actual action on ground.

Banerjee argued for the role of institutional capability, strength and credibility, in addition to formalised Standard Operation Procedures (SOPs) for the same, as crucial parameters for achieving this objective.

Amit Kapoor, Chairman, Institute for Competitiveness the second catalyst, highlighted that the means to achieve the vision of competitiveness and inclusive growth, as being focused on two planks – social objectives and economic objectives of growth.

He further stressed that unless we build social and economic infrastructure in fields like education and health, we will not be able to reap our demographic dividend, a development he articulated as being no less than a catastrophe.

Speaking on the actual, ground-level implementation challenges faced by many enterprises and entrepreneurs, Jagat Shah, founder and CMD, Global Network, cited various evidences to put forth his argument on the need to simplify bottlenecks.

These include access to technology, academia-industry linkages,leveraging digital modes for virtual marketplaces and exhibitions, and focus on building smart villages to reduce burden on cities.

He also pointed towards sub-optimal implementation of incentive schemes launched by the government, despite having budgetary allocation. Efforts that ensure efficiency of such parameters, according to him, will be the key to curate a functioning knowledge economy.

Naina Lal Kidwai, Chair, India Advisory Board, Advent International Private Equity, quipped that the myth that labour productivity is the cause of reducing competitiveness of Indian industries needs to be busted.

“Concerted efforts on fronts that address structural issues in cost of credit, power, logistics and other supply side factors, need to be put in place”.

In particular, she said that for small and micro enterprises, plug and play models could be envisaged to enhance their competitiveness. She further stressed on the need to change the fundamental problem of mindset towards the business community in general, in order to build an ecosystem based on trust.

Shailesh Pathak, Chief Executive Officer, L&T IDPL, highlighted  the need for empowering and strengthening the narrative around decentralised units of governance, particularly in the cities.

Pathak stressed on the need to engage with and empower mayors of cities. Other prominent factors obstructing India’s competitiveness story, according to him, include issues with contract enforcement and rule of law, inefficiencies in the judicial ecosystem and the lack of state capacity cutting across the Union-State Government dichotomy.

Nitin Desai, former Under Secretary General, United Nations, while acknowledging the importance of federalism in delivering on the visions of economic inclusivity of growth, illustrated the China example to put his point.

He submitted that even a dictatorship-like governance structure in China is premised on the decentralisation principles of three tier government which strictly adhere to the principles of meritocracy for promoting leaders from grassroots.

Speaking on the need for permeating the federal structure in industrial policy making in India, Indira Rajaraman, Member of the 14th Finance Commission, highlighted the need to pick up entrepreneurial activities and potentials of India at Taluk or district levels, which should then inform the policy imperatives in a bottom-up manner.

She illustrated the same by highlighting the vast potential of a weed-based yarn making entrepreneur in Tamil Nadu, which is not getting the support that it deserves currently, while postulating about the existence of several such indigenous grassroot entrepreneurs that are unable to scale.

Agreeing to the specific points made by others, Rathin Roy, Managing Director, Overseas Development Institute, picked on the point of federalism to stress on the need for simplification of taxation regime at the State-levels.

He further submitted that labour regulations have now become the biggest beast in the way of achieving labour welfare and occupational safety, a development which the climate sector is also moving towards.

Roy highlighted the rationing nature of our political economy while pointing out that the political class and bureaucracy seems engaged in enabling ease of business and living for a few. On the previous points made for the need to institutionalise federalism in policy making, he argued for the ignorance of the electorate for voting on such issues.

Abhishek Kumar, Partner, Indicc, threw light on the larger problem in this context which manifests itself  when the Government sets out to achieve a target without drawing an actionable roadmap for the same.

He also opined that the basic questions about manufacturing where, how, for whom and at what cost should be given due importance in policy making.

On the issue of ripe sectors for inclusive growth, he argued against the skewed focus currently given to sectors like textiles which are getting automated at an alarming rate, instead of related ones like garment manufacturing where human-centric operations are at the core.

In his concluding remarks, Bipul Chatterjee, Executive Director, CUTS International, noted that there is a need for chalking out a long term vision for the Indian growth story. Chatterjee further said that the tasklist of governments should be reduced gradually while focusing on improving the quality of governance, in line with the government resolve of ‘less government and more governance’.

The webinar saw participation of over 100 participants and included eminent stakeholders who will be speaking in future webinars of this colloquium, which include Montek Singh Ahluwalia, Ashima Goyal, Ajay Shankar, Manoj Panda and others. As an outcome, a White Paper will be released by CUTS International post all the webinars scheduled for this colloquium, which will be drawing inferences and inputs from these discussions.