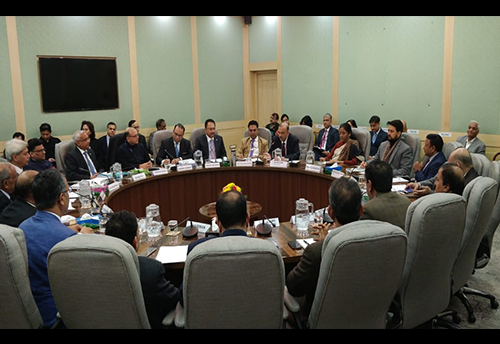 Public procurement in India exceeds one third of its GDP and is estimated to be worth US Dollar One Trillion.

“India being not a signatory of Plurilateral Agreement on Public Procurement in WTO,  there is enough policy space left to give special dispensation for Indian industry. If used wisely, it could help attract latest technology and help build capacities and capabilities of Indian industry especially MSMEs to withstand global competition”,  Dr Saxena is said to have told Finance Minister.

Giving an illustrative example,  FISME presented names of accessories used in Power transformers to show how they alone clocked an import bill of one thousand crore.

‘Utilities could be tasked to develop them in MSME sector in India saving on import bill and developing industrial base.  Similar opportunities exist in sector like Railways, Aero-space and others, he pointed out.

FISME has suggested a slew of measures to Government to improve quality of Public Procurement and to use its strategic lever for industrialization specifically ensuring MSMEs’ participation in it.

FISME President highlighted the difficulties MSME owners faced in meeting decision makers in Government agencies to ensure timely disposal of their grievances. It has demanded that all officers must ear mark certain time ‘open to public’, grievances recorded and addressed.

Stressing need to contain the propensity of Government Agencies for litigation and to make arbitration more effective, FISME has requested the office of Chief Economic Adviser to collect and report data in Economic Survey on number of commercial disputes pending, their duration and quantum of funds involved. It also suggested that guidelines might be issued directing Government agencies not to challenge awards of Arbitrators routinely to cut down litigation.