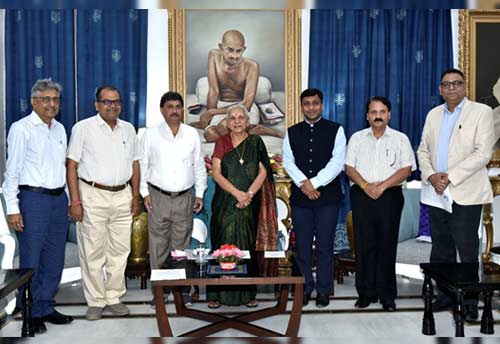 The delegation highlighted the need for upgradation of industrial infrastructure especially the industrial estates and industrial areas in Uttar Pradesh.

FISME requested Governor to help in sharing the best practices in upgrading industrial estates. Several such successful models were executed during her tenure as Minister and Chief Minister in Gujarat.

As part of one of three focus areas, FISME is collecting data of all industrial estates in the country and studying the various difficulties MSMEs face in them with regards to hard and soft infrastructure.

The first pilot of the work programme is planned in UP and Governor Anandiben is likely to inaugurate the convention in Lucknow in fourth quarter of 2022.

She arranged a meeting of FISME delegation with Vice Chancellors of premier Universities of the State to come out with a plan to induce Industry-Academia partnership. Additional Chief Secretary Mahesh Kumar Gupta coordinated the meeting between FSIME delegation and VCs of Universities.