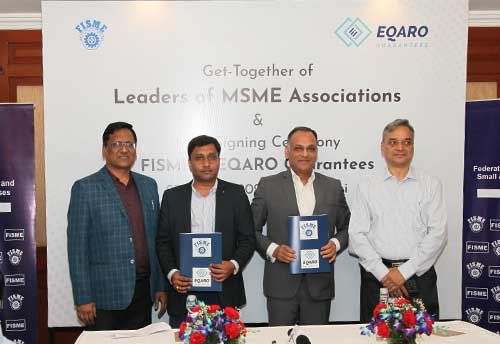 New Delhi, May 2 (KNN) To fulfil the need of urgent funds, a digital lending platform is being jointly created by the Federation of Indian Micro and Small & Medium Enterprises (FISME) and Eqaro Surety Pvt Ltd, provider of Financial Guarantees.

It will provide access to collateral free capital up to Rs 25 lakh to Micro and Small & Medium Enterprises (MSMEs).

An MoU in this regard was signed by Prashant Patel, President FISME and Vikash Khandelwal, CEO of Eqaro in Delhi recently.

“Lending has traditionally been collateral based. This unique, first time in India initiative will help MSMEs get easier access to credit backed by a surety guarantee without the need to put up collaterals,” said CEO of Eqaro.

According to President of FISME, “It is like an Overdraft facility initially pegged at Rs 25 lakh which could be tapped anytime from anywhere should an MSME need funds.”

Former Secretary, Department of Financial Services, D.K. Mittal who was present during the MoU signing ceremony has termed the initiative ‘path breaking’.

“Lack of collateral is the single biggest bottleneck that small entrepreneurs face in accessing institutional funds and obviating the need for asset-based collateral by Sureties can revolutionize MSME lending” he added.

The platform will on board MSMEs after due diligence and will have Banks & NBFCs on board to provide credit backed by guarantees of Eqaro and is expected to launch this year itself.

While Surety Guarantees are a proven financial instrument used in developed countries especially in United States in place of traditional collateral securities or Bank and performance guarantees, it is still in its nascent stages in India.

In the Budget speech 2022-23, Finance Minister Nirmala Sitharaman had already announced that surety insurance Bonds would be accepted as a substitute for bank guarantee for public procurement & infrastructure projects.