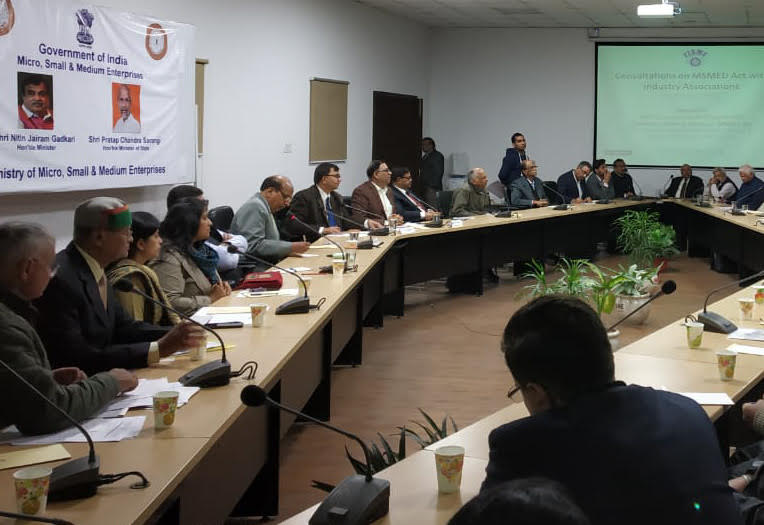 The meeting was chaired by Surendra Nath Tripathi, Chairman of the Working Group- former Secretary (Parliamentary Affairs) and now heading Indian Institute of Public Administration (IIPA),  constituted  by Ministry of MSME to propose changes in the MSMED Act.

The meeting was convened by Anil Bhardwaj, Secretary General, FISME and a member of the Working Group.

Speaking on the occasion Tripathi sought suggestions of the industry representatives on five issues.

“Should the Act merge definition of Service and Manufacturing Enterprise;  should we opt for definition based on turnover and employment or investment or both; should there be mandatory registration, should National MSME board be set-up on the pattern of GST council to be effective; what should be other provision is Exit or closure and the Infrastructure issues”, he asked.

The opinion on choosing the criteria to define MSMEs remained divided. While a few geographical associations were in favour of continuing with investment as the preferred criterion the others were quite vocal in opting turnover as a criteria post GST regime as it was considered simple and transparent.

However, most sectoral associations such as of Pharma, Electronics & Electricals, Transformers etc were unequivocally in favour of  a turnover based criteria.

Besides the industry associations from NCR region, representatives from other States such as Gujarat, Maharashtra and Karnataka also participated.

The most important areas discussed in details were related to provisions on delayed payments, public procurement and registration and definition.

MSME representatives complained of ‘lack of teeth’ in the MSMED Act and wondered whether awards given by Facilitation Councils could be given powers to realize the dues from defaulting buyers as arrears of land revenue.  Most of them expressed need to have legal experts in facilitation councils.

At the same time, experts expressed their apprehension whether  provisions such as ‘collection of dues as land revenue’ for Government dues could be used for collecting dues  of individual also.

MSMEs leaders were also miffed with procurement practices of Government agencies like Railways and Defence which tended to put onerous burden on MSME suppliers with requirement of bid bonds, performance bonds and delays in payments.

“The biggest buyers like Railways and State owned Power Distribution Companies are not registered with TReDS platforms and that has limited the benefit of these platforms to MSMEs”,  told the IEEMA representative.