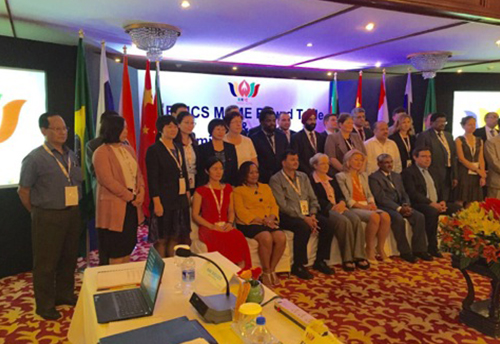 Agra, July 28 (KNN) Two-day meeting of senior officials of BRICS countries – Brazil, Russia, India, China and South Africa – for better cooperation amongst micro, small, and medium enterprises (MSMEs) and to work for a  pact on services, including facilitation of business visas, is underway here.

The two-day meeting will also have discussions on e-commerce and intellectual property.

On the first day, roundtable   meeting would be conducted to discuss issues on MSMEs.

DC-MSME would make a representation on Regulatory framework and institutional structure of MSMEs in the BRICS region.

There would also be discussions on MSMEs and their role in innovation, technology transfer and international projects

The apex industry body for MSME Associations in India, FISME, would make a presentation on Integration of MSMEs into global value chains.

The BRICS Summit, to be attended by heads of States of all five nations, will be held in Goa on October 15-16, which will be preceded by the trade ministers meeting.

For MSMEs, India has reportedly proposed a framework of cooperation to regulate tariffs, check non-tariff measures (NTMs), ensure transparency in sanitary and phytosanitary measures and exchange information on regulatory mechanisms.

The BRICS economies comprise 43 per cent of the world population and account for more than a third of the world gross domestic product. The five countries contribute about 17 per cent to global trade.