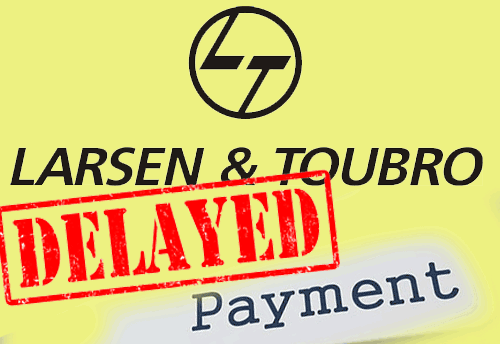 New Delhi, Aug 3 (KNN) Larsen & Toubro Limited (L&T), the largest construction, manufacturing & IT behemoth of India avow to be ‘a professionally managed multinational’ and ‘promise to ensure transparency and ethics in its engagements’.

But when releasing payments to micro, small & medium enterprises (MSME) suppliers come, they behave quite unprofessionally and use all tricks to delay the payment.

While researching on the status of the delayed payment by large corporates, KNN India team has interviewed a large number  MSMEs whose  payment are being held up inordinately.  And L& T has been cited as a defaulter by quite a few.

While very few suppliers came forward to provide details of their delayed payments, due to obvious reasons, at least one MSME has provided documentary proof of holding up of a considerable amount by L&T for more than three years, without any reason.

Another interesting aspect is, in the present case, the payments withheld   as ‘Bank Guarantees’, guarantees against advance payment and performance guarantees.

The documents accessed by KNN India shows that the particular MSME supplier was never released any ‘Advance’ by L&T and the period of performance guarantee was over about two year back. So the payments are being held up by L&T for three years without any factual reason.

When an email was sent by KNN team to L&T to explain their position on the issue, the ‘Professionally managed Multinational’ preferred to remain silent.

Forget about ethics, any corporate citizen of India is expected to at least abide by the law of the nation but L&T is faltering even on that ground.

In 2006, Government of India enacted MSME Development Act, with one salient section on the issue of ‘Delayed Payment’.

The Act says, in simple terms, payment to all MSME suppliers must be released within 45 days, and if the buyer fails to do so, they have to pay interest at a rate thrice the current Bank rate.

As per the statutory declaration under the Act, L&T has reported that as on 31st March, 2015, they had more than Rs. 100 Crore overdue payments  to the MSME suppliers!

An interesting facet of the present case is L&T is delaying the payment with the plea of withholding the ‘Guarantees’ which by the finesse of accounting may not have been taken as ‘Delayed Payment’.

So there is every possibility that much more amount of MSMEs is being withheld by L&T as ‘Security Deposits or Performance Guarantees’ which are not even counted in their statutory declarations on ‘Delayed Payment’. (KNN/ DB)