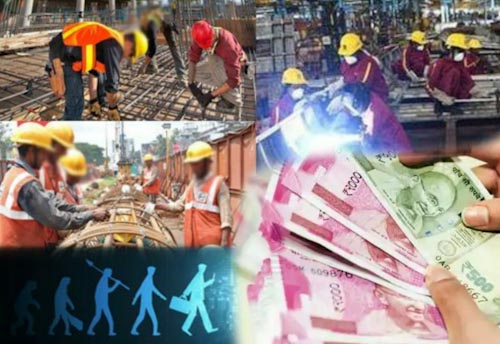 Bengaluru, Apr 13 (KNN) The micro, small and medium enterprises (MSMEs) from across the country are struggling big time to pay the salaries/ wages of their employees/ labourers. The associations are already making several recommendations to government to ease their burden suggesting different ways.

On such suggestion made by many associations to the Central and State Governments is over minimum wage. The MSMEs want some relaxation in the minimum wage criteria.

The Pathankot Road Manufacturers Association has written a letter to Prime Minister Narendra Modi suggesting that the wages of workers for the lockdown period should be paid by ESI.

Shant Kumar, Secretary General of the association pointed, “ESI is having a fund of approx. Rs 1,00,000 crores and the same is lying in the shape of FDRs with the banks and government of India.

He said, “ESI is collecting money from the workers and industry on account of insurance . Covid-19 is a medical emergency. ESI should come forward to help the insured workers from whom ESI is collecting contribution.”

Further, in the letter the association recommended the PM that Provident Fund can also be used to pay the workers for lockdown period and thus MSMEs can be helped.

He pointed that, “Employees Provident Fund Organization (EPFO) is having an unclaimed fund to the tune of approximately Rs 35,000 crores.”

Down south, the Federation of Karnataka Chambers of Commerce and Industry (FKCCI), in a letter to the Prime Minister Modi, demanded abeyance of payment of minimum wages for at least one year. Further, no inspector raj by the Labour Department for at least six months where by no inspection of any kind to be made for the period, FKCCI President C R Janardhana said.

This will enable the MSMEs to revive without any interruption, he said. The MSME sector is facing a salary burden of an average Rs 6,500 crore per month with the implementation of minimum wage scheme from April this year.

Last year, the Karnataka government had asked the industries to pay minimum wages of Rs 12,500 per month for unskilled and Rs 13,000 per month for skilled workers from April this year.

Citing the example of neighbouring states such as Telangana, Andhra Pradesh, and Tamil Nadu, he said the minimum wages vary between Rs 8,000 and Rs 9,000 there, whereas Karnataka has made it mandatory to pay Rs 13,000 per month.

“It is impossible for MSMEs, especially in rural areas, to pay such a high minimum wage in addition to very high electricity charges, rent and manage their business. We have seen, already, readymade garment industries have migrated from Karnataka to Tamil Nadu and Andhra Pradesh. Karnataka has lost hundreds of jobs,” Janardhana said.

"There is a need for lifting the lockdown in a phased manner to allow low density industries to function in shifts and to allow high-density labour-intensive industries to work in 3 staggered shifts," he said.

He has also highlighted the need to release payments due to MSMEs and traders from central, state, PSUs, private and large enterprises. It is the right time to roll out incentives to MSMEs to manufacture locally, he said.

Raising similar concern, an MSME entrepreneur from New Delhi pointed that in Delhi the minimum wage is approximately Rs 14,700 for unskilled workers.

He raised concern that the MSMEs cannot pay this wage currently. So he suggested that low wage and adequate manpower could be a better option. (KNN Bureau)