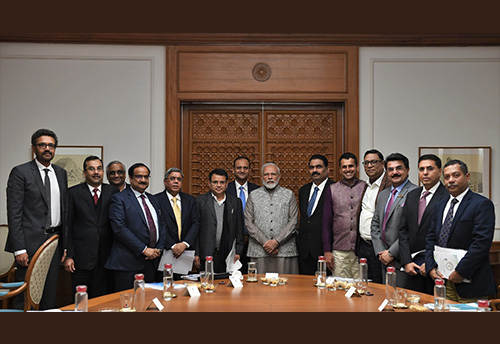 In a series of meetings with leaders of key sectors, PM Modi met representatives from MSME, FMCG and renewable energy sectors on 27th Dec 2019 at his residence in New Delhi.

In a marathon meeting lasting almost two hours and a half, the discussions were candid and free flowing, KNN learnt.

To address the extreme stress being faced by MSMEs due to host of factors and slowdown, FISME demanded ‘immediate re-fixation of  limits both Fund and Non-Fund to 50% of turnover and the ageing period of receivables/stocks increased to 180 days, without additional collateral’.

Terming the three TReDS bill discounting platforms as transformative, Secretary General FISME  presented an 11 point agenda to increase the cumulative turnover of the platforms from current level of Rs. 8000 crore  to Rs. 100,000 crore in in next 18 months to further ease liquidity in MSMEs.

Stressing for payment of MSME dues stuck in Corporate Insolvency Resolution Process (CIRP) under Insolvency and Bankruptcy Code as MSMEs are classified as Operational creditors, FISME presented two specific solutions to the Government.

To make Indian manufacturing competitive, FISME stressed the need to focus on the three functions of the Government which have direct bearing on cost of doing business.

FISME explained that Government had three distinct functions: As a ‘Regulator’, ‘Provider of major inputs/ services’ and ‘Buyer of Goods and Services’.

“Off late Government’s focus has turned on ‘Ease of Doing Business’ resulting into unprecedented rise of India in World Bank’s global ranking.  However,  the two other roles constitute the hidden part of the iceberg of cost of doing business. High cost and poor quality of key inputs provided by Government agencies such as Energy, Transport, Finance, Steel etc has a direct bearing on cost of produce in India” FISME SG told.

‘The Public Procurement is almost one third of India’s GDP amounting to almost  US$ one Trillion and sets the benchmark for commercial practices, technology and quality in the country.  The widespread malfeasance in Public procurement is resulting in crowding out of quality and efficient manufacturers’.

While recording grievances in public domain itself creates a pressure to address them fast, the systemic study of feedback periodically- say once an year,  would lead to reform agenda for Government.

Further, it demanded framing of Rules under IBC for proprietorship/ partnership firms also which constituted 97% of MSME sector and were denied access to IBC as current Rules for Companies only.