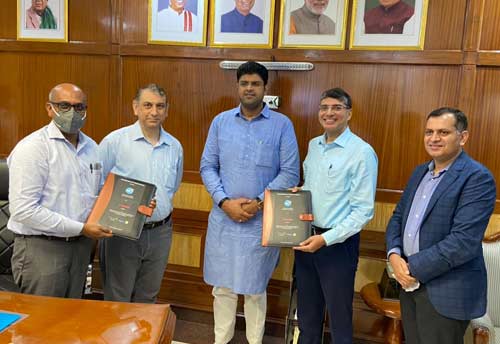 Chandigarh, Aug 5 (KNN) In a bid to create a pathway for the MSMEs products to move towards the international market, the Haryana Government signed MoU with ‘Walmart Vriddhi’ and ‘Haqdarshak’.

Reportedly, the MoU was signed on Wednesday in the presence of Haryana Deputy Chief Minister,  Dushyant Chautala.

The MoU was signed by Director General, MSMEs Department, Vikas Gupta, on behalf of the Government,  Nittin Dutt on behalf of Walmart Vriddhi and CEO,  Aniket Doeger on behalf of Haqdarshak.

Deputy Chief Minister, who also holds the portfolio of Industries and Commerce Department, said on the occasion that the state government wants to set up more and more industries in the State so that the youth get employment.

In order to promote MSMEs apart from large industries, many important concessions have been given for investors in ‘Haryana Enterprises and Employment Policy-2020’.

He said that the State Government is adopting the ‘Make-in-India’ policy of the Central Government, so that Haryana can become a favoured investment-destination.

Dushyant Chautala informed that the state government is giving priority to setting up industries in rural areas, this will stop the migration towards the cities, while the artisans of the villages will contribute in strengthening the economic condition by preparing their products at less cost.

He said that with the help of e-commerce companies like ‘Walmart’, the state government will help in displaying the products of traditional weavers of rural areas, handlooms and other handicrafts at the international level.

He urged the CEO of ‘Haqdarshak’ company, Aniket Doegar, to prepare a research report on the best running welfare scheme of each state of the country so that Haryana under its ‘One-Block, One-Product’ scheme can work out the possibilities of implementing them.

Vikas Gupta informed on the occasion that after signing of MoU with ‘Walmart’, the products of MSMEs of the state will be displayed in 24 countries and will be available in 10,500 stores under 48 banners.

''MSMEs would also be provided training from industry experts as per the requirement,'' he added.

Gupta also informed that after signing of MoU with ‘Haqdarshak’ company, MSMEs of the state will be able to access the services of government and Private welfare schemes. Detailed information of this company’s 7,000 welfare schemes in 22 states of the country is available on the website, which will directly benefit MSMEs.

On this occasion, Nittin Dutt on behalf of ‘Walmart Vriddhi’ and Aniket Doegar, CEO on behalf of ‘Haqdarshak’ assured that company will cooperate in showcasing the products of MSMEs of the state at the international level.