CAIT to launch protest against e-tailers for violating FDI policy 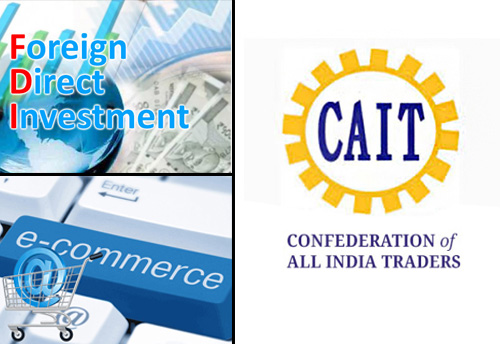 CAIT to launch protest against e-tailers for violating FDI policy

New Delhi, Nov 11 (KNN) The Confederation of All India Traders (CAIT) has announced to launch a series of protests against e-tailers like Amazon, Flipkart and other e-commerce firms for continuous violation of the FDI policy from Wednesday.

"We stand committed to wage a strong fight against Amazon, Flipkart and other e commerce companies which are bent upon in destroying the country's retail business comprising of more than 7 crore traders across country and distorting e commerce market of India"- said trade leaders from 27 states gathered here at a National Traders Conference held by CAIT on Sunday.

Speaking on the same, the CAIT’s Secretary General Praveen Khandelwal said the frontal war against Amazon and Flipkart will begin from November 13 and continue till January 10, 2020.

A “National Protest Day” will be held on November 20 and dharna will be organised in more than 500 cities. About 5 lakh traders are expected to take part in such protest, the traders’ body said in a release.

The traders’ body further alleged that these companies were circumventing the law and abusing Press Note No 2 of the government’s foreign direct investment (FDI) policy.

Khandelwal said the conference has chalked out a roadmap for its nationwide agitation from November 13, which will be observed as “National Awareness Campaign Day” when traders delegations across the country will submit an exhaustive memorandum to all MPs, urging them to raise the issue in Parliament.

The first phase of nationwide agitation will be concluded with a three-day National Traders Convention -- to be held from 6 to 8 January in New Delhi -- which will be attended by trade leaders of about 20 thousand trade associations.

The national governing council of CAIT in association with other stakeholders will hold a meeting on January 9 and while taking stock of the situation will decide modalities of the second phase of its agitation.