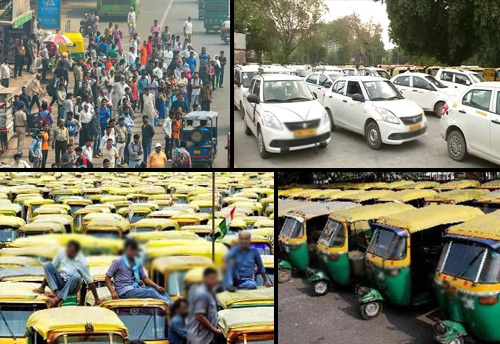 New Delhi, Sep 19 (KNN) The United Front of Transport Associations (UFTA) on Thursday has called for a strike due to which several private buses, taxis and auto rickshaws remained off the roads.

The strike was called against various provisions of the amended Motor Vehicle (MV) Act, including the steep hike in penalties for various traffic-related offences.

The UTFA on Wednesday said that both center and Delhi government had forced them to call for a strike.

"We have been seeking redressal of our grievances related to the new MV Act from both the Centre and the Delhi government for the last 15 days, but no solution is there is sight forcing us to go on one-day strike," said UFTA general secretary Shyamlal Gola.

However, the strike didn’t affect the Delhi metro and buses services.

The UFTA is an umbrella body which represents 41 associations and unions of goods and passenger segments.

"We waited for a long time for the bus but when it came it was full as compare to other days. Somehow, we got place inside the bus,’’ Said The resident of Katwaria Sarai, an office-goer, to KNN India.

‘’Since, there were less number of buses plying on the road, I chose to commute with metro so that I can reach office on time’’, said another office-goer.

Most of the schools in the national capital remained closed as a result of the strike. Many parents received messages from their children's schools informing them that educational institutes will be closed on Thursday.

The federation leaders demanded withdrawal of the provisions of the amended Act, such as steeply hiked penalties and limiting the liability of insurer to Rs 5 lakh, among others.

However, Sanjay Samrat, president of the Delhi Taxi Tourist Transporters Association, said they will not be part of the strike.