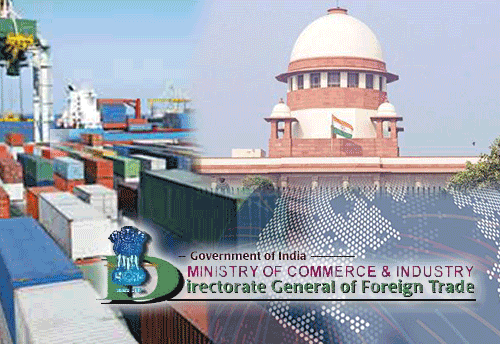 New Delhi, May 11 (KNN) The Directorate General of Foreign Trade (DGFT) has implemented the Target Plus Scheme for export promotion in line with the Supreme Court’s decision.

The Union Cabinet had last month approved the implementation of Supreme Court’s judgment on eligibility under the Target Plus scheme for exporters that will lead to settling of claims as per original provisions of the foreign trade policy (FTP).

The settlement of exporters’ claims will have a revenue implication of Rs 2,700 crore, according to an official release.

In other words the scope of benefits under the TPS was narrowed by the DGFT during that period after the scheme was implemented but the exporters were not satisfied and filed an appeal arguing that the new provisions could not be applied retrospectively which the apex court upheld.

The Supreme Court in a judgment on the Target Plus scheme in 2015 said that the Centre’s notifications making certain products ineligible and reducing the rates could not be applied retrospectively and they would be effective only from the date of their issue.

DGFT issued a notification in this regard on May 8, 2017 and instructed all its Regional Authorities to re-examine all the eligible claims/applications pending for TPS 2005-06 for issue of the balance claim/recovery of wrong claims as applicable after ensuring due diligence and ensuring genuineness of the exports.

The objective was to accelerate growth in exports by rewarding Star Export Houses with minimum threshold export turnover of Rs.10 crore in the previous year.

The scheme provided for three slabs of entitlement of duty credit scrips 5%, 10%, 15% based on the following 3 conditions:

Lastly where the percentage incremental growth was above 100% the duty credit entitlement was 15%.