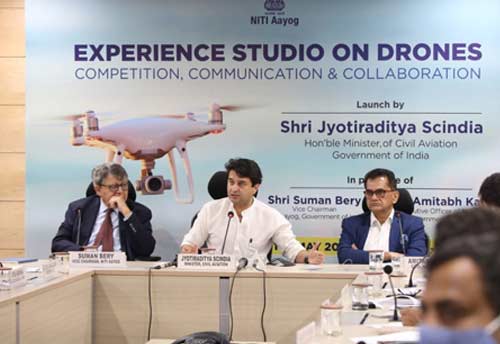 New Delhi, May 12 (KNN) Aviation Minister Jyotiraditya Scindia has said that the ease in regulations introduced by the central government will help India in becoming drone hub by 2030.

The Minister said the government drone programmes such as Drone Shakti and Kisan Drones will accelerate India’s drone manufacturing potential.

Speaking at the launch event of NITI Aayog’s Experience Studio on Drone, he said it is imperative to enhance the usage of drones in different industrial and defence-related sectors to leverage the benefits of drone technology.

Suman Bery NITI Aayog Vice Chairperson opined that drones are likely to be key creators of employment and economic growth due to their reach, versatility, and ease of use.

The experience studio will support the promotion of various applications of drone technology to public and private stakeholders as well as help them fast-track adoption of this technology within their organisations and aid in building a robust drone industry in India.  (KNN Bureau)