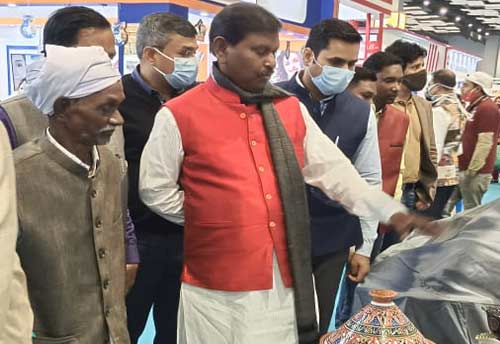 The festivals will showcase tribal crafts, cuisine and heritage of different tribal communities.

More than 200-stall exhibition is also offering variety of products - from hand-woven cotton, silk fabrics, handmade jewellery and exquisite cuisines by artisans from across India.

It turned out to be a meeting ground for interactions between the state’s tribal folklore and the urban dwellers.

Tribal Research Institute Manipur, under the Department of Tribal Affairs & Hills, had organised a 3-day state level workshop on tribal art & paintings competition from 16th- 18th November 2021 in collaboration with the Imphal Art College, which was inaugurated by Letkhogin Haokip, Additional Chief Secretary, Government of Manipur.

The competition is aimed to boost the creative skills, personalities, confidence, mental and imaginative skills of the youth of the tribal communities.

Telangana released a series of video documentaries based on the two legendary freedom fighters - Ramji Gond and Komaram Bheem. The programme was eventful as the participants were descendants of the freedom fighters.

The mela saw large crowds of enthusiastic people engaging in frolics and interacting with the tribal artisans.

The objective of the mela was a 3-P step of preserving, promoting and popularizing tribal traditional art and crafts. The efforts for the commercial viability of tribal artisans gave them a sense of self-empowerment

Janjatya Gaurav Divas was celebrated in Jammu and Kashmir Union Territory with great fanfare and saw participation from different quarters. Lieutenant Governor of Jammu, Manoj Sinha chaired the function at Jammu while Divisional Commissioners and DMs organised the event at 20 different districtsof UT.

Two Day Capacity Building Programme for Preparation of GPDP in Tribal Areas was  organized in association with NTRI, Delhi and  Minister of Tribal Affairs Arjun Munda joined the event virtually.

The culturally-rich islands of Andaman and Nicobar Islands alsoorganised a ‘Cultural Programme of Jarawa Tribe’ to present their glorious heritage and art forms on 16th November.

All these initiatives have been organised to provide a platform for the tribal communities to present their talent in various fields and lay out a roadmap for their all-round development.