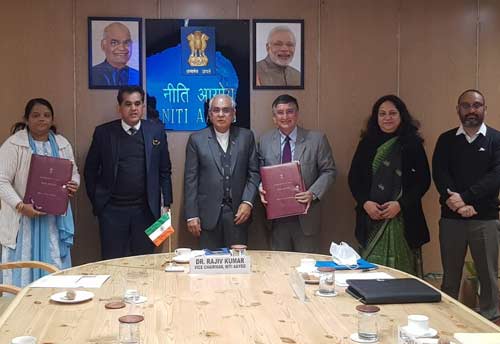 New Delhi, Dec 21 (KNN) To encourage and promote millet production, NITI Aayog signed a Statement of Intent with United Nations World Food Program (WFP) on Monday. The partnership focuses on mainstreaming of millets and supporting India in taking lead globally in knowledge exchange using the opportunity of 2023 as an International Year of Millets.

Further, the partnership will aim at building resilient livelihoods for small-holder farmers and adaptation capacities to climate change and transforming food systems.

The Sol focuses on strategic and technical collaboration between NITI Aayog and WFP, to strengthen climate resilient agriculture for enhanced food and nutrition security in India.

The parties will be working on the following activities:

The outcome of this partnership will be achieved in following four phases:

The Government of India observed 2018 as a year of millets to encourage and promote millet production. Leading this initiative further, GoI spearheaded the UNGA resolution for declaring 2023 as the International Year of Millets.

Numerous steps have been taken to promote millets including establishment of centre for Excellence, Integration of nutri-cereals in National Food Security Act and establishment of Millet Mission in multiple states. Despite this, various challenges in terms of production, distribution and adaptability among consumers remain.

Under the distribution system, it is time that we shift the focus of food distribution programmes fr0m ‘calories fundamentalism’ to providing a more diversified food basket, including coarse grains and millets to improve the nutritional status of pre-school children and women of reproductive age. NITI Aayog and WFP intend to identify and address these challenges in a systematic and effective manner.