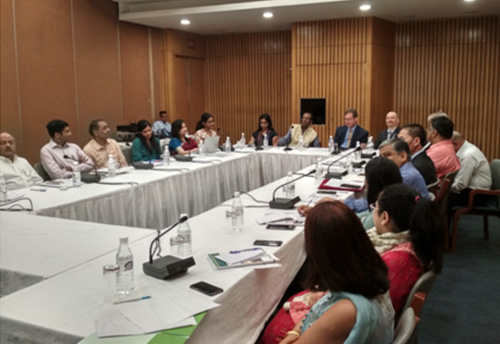 New Delhi, Aug 14 (KNN) There is the need to set up more Inland Container Depots and strengthen digital connectivity within and across countries in the BBIN region to facilitate off-border clearance so as to reduce the time and cost of doing cross-border trade, said Bipul Chatterjee, Executive Director, Consumer Unity and Trust Society (CUTS) International.

He was speaking at the stakeholder consultation meeting organized by CUTS International with the support of the U.S. Department of State on what needs to be done to facilitate effective implementation of the BBIN MVA.

Chatterjee said, “While the Bangladesh, Bhutan, India, Nepal Motor Vehicles Agreement can yield long term benefits but for its effective implementation many short-term challenges are to be addressed to arrive at a mutual win-win situation for all the stakeholders and countries involved.”

He mentioned that while the framework agreement for the BBIN MVA has been signed in June, 2015 but the same is yet to be implemented owing to a number of challenges pertaining to infrastructure deficits, differences in regulations and trust deficit among the signatory countries.

Robert Garverick, Minister Counsellor for Economic Affairs & Environment, Science & Technology, U.S. Embassy, pointed out that the United States is setting up a new development finance institution to fund projects to propel development of energy, infrastructure and digital connectivity in the Indo Pacific region.

He also emphasized that the private sector would need to play an important role to sustain the growth and connectivity in the region.

Participants at the workshop also pointed out that digital connectivity should be effectively used to develop an online trade facilitation platform and appropriate risk management system to facilitate faster cargo clearance at the border.

The need for facilitating multi-modal connectivity among the BBIN countries coupled with regulatory synchronization for doing the same was also emphasized.