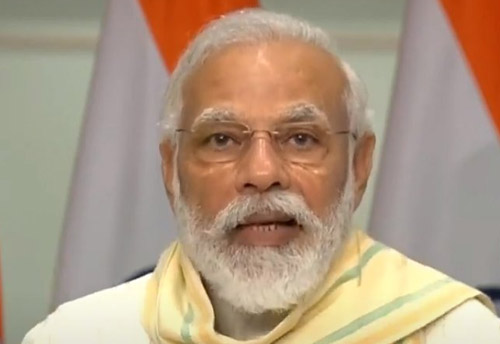 The programme aims to provide jobs to labourers in rural areas which have been worst affected by reverse migration. According to the government, the scheme focuses on 116 districts across six states including Uttar Pradesh, Bihar, Jharkhand, Madhya Pradesh, Rajasthan and Odisha.

The 116 districts that have been chosen, together account for over 67 lakh migrant workers which is nearly two thirds of the total returnee migrants.

“The country understands your emotions and your needs. The Garib Kalyan Rojgar Abhiyaan starting from Khagaria in Bihar is a major tool to fulfil this need and emotion,” PM Modi said.

The Prime Minister interacted through remote video conferencing with the villagers of Telihar in the Khagaria District of Bihar from where the Prime Minister Garib Kalyan Rojgar Abhiyaan was formally launched.

''Both the Centre and the State Governments were concerned about the welfare of the poor and the migrants. The AatmaNirbhar Bharat Campaign itself was launched with a 1.75 Lakh Crore package under PM Garib Kalyan Yojana,'' said PM Modi.

PM termed this day as a historic day as a massive campaign kickstarted for the welfare of the poor, for their employment.

''This campaign is dedicated for our labour brothers and sisters, for the youth, sisters and daughters living in our villages. It is our endeavour that through this campaign workers and workers are given work near home,'' he avowed.

''The Government took a major step by removing various shackles of unwanted rules and regulations so that the farmer can freely sell his produce anywhere in the country and connect directly with traders who offer a better price for his produce,'' he added.

Modi said the farmers are being directly linked to the market and that the Government has provided an investment of Rs 1,00,000 crore for linkages like cold storage etc.

The largest number of migrant workers (three million) have returned to Bihar since the Covid-19 pandemic swept through the country leaving daily-wage labourers jobless in big cities.

Laying of fibre optics cable, railway works, urban mission jobs, sanitation works, waste management, poultry, farm ponds and training through Krishi Vigyan Kendras will be given to the migrant workers under the programme.