Street Vendors to sit on indefinite protest from today 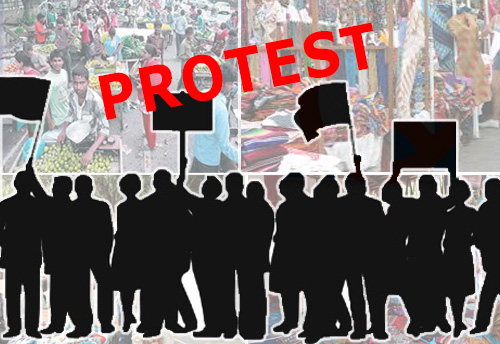 Street Vendors to sit on indefinite protest from today

New Delhi,  Nov 13 (KNN) National Association of Street Vendors of India (NASVI) has announced that city vendors will sit on an  indefinite protest outside the Civic Centre under the leadership of  Arbind Singh, the National Coordinator of NASVI starting Wednesday.

They expressed anguish at the attitude of the authorities in Delhi and claimed that vendors from markets after markets are being evicted and the government is "camouflaging" this with implementation of the Street Vending Act.

''Appeal of the vendors have not been able to wake up the authorities in Delhi – LG, Chief Minister, Municipal and Police Street Vendors leaders from different Markets shared their agony,'' Singh said on Monday at a press conference.

The Urban Development Department of the Government of NCT of Delhi issued a notice inviting bids for the conducting Demand Survey and MIS entry of Vendors/Hawkers/Weekly Markets in the zone in Delhi on 31.10.2019.

Unfortunately the government headed by a Chief Minister who has been propelled to Power by people have forgotten to involve the people. The Vendors demanded that the survey should be conducted by either TVCs or Street Vendor Organization or by any autonomous institution like School of Planning and Architecture, Delhi.

The Street Vendors Act’2014 sought to provide a protective cover to the vendors and a statutory guarantee against evictions and harassment but the vendors are yet to experience that. The reluctance on the part of the above mentioned Authorities will not stop the vendors from claiming their inherent right of vending.

Around 4000 street vendors hailing from different parts of Delhi will join the protest at the Civic Centre.