Tamil Nadu firework industry to stage protest on Nov 26; demands exemption in use of fireworks from provisions of Rule-3(3B) 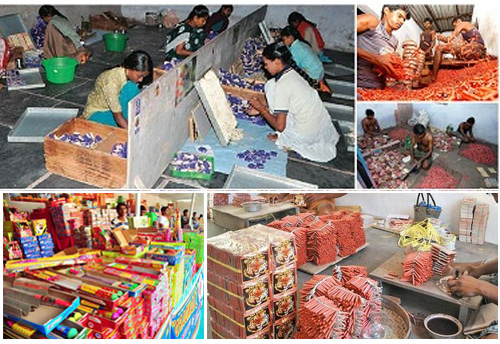 Tamil Nadu firework industry to stage protest on Nov 26; demands exemption in use of fireworks from provisions of Rule-3(3B)

New Delhi, Nov 21 (KNN) After incurring huge loss during Diwali due to imposed conditionalities on sale and use of firecrackers by the country's top court, the Federation of Tamilnadu Fireworks Traders (FTFT) has decided to stage protest to call for protection of the fireworks industry from closure.

The protest is being arranged by FTFT on November 26, 2018 at Valluvar Kottam, Chennai, in order to sustain the employment of 8 lakh Tamil Nadu workers.

Talking to KNN India, V. Raja Chandrasekaran, President, FTFT, said “The firework units, mostly comprising micro, small and medium enterprises (MSMEs) in Sivakasi are indefinitely closed after Diwali since they cannot produce any kind of fireworks after the orders passed by the Supreme Court.”

Due to the top court's orders, 80% of production got hampered and the units are facing closure post this, he added.

He said that several thousand factories and more than a crore dependents cannot lose their business and livelihood for one year.

“Therefore, we demand to exempt use of fireworks from the provisions of Rule-3(3B) of Environment (Protection) Rules, 1986,” he added.

Under the provisions of Rule- 3(3B), fireworks are already eligible for exemption since the emissions prevail in the atmosphere for not more than 48 hours (two consecutive 24-hours average).

Therefore, because of the short term emissions, use of fireworks may be treated as ‘exceptional event’ as is the practice in other countries and exempted from the provisions of Environment Rules.

Another point he raised that the 2-hour’s time restriction for use of fireworks has also brought a disaster to the fireworks industry and the Indian celebrations and traditions.

Besides, the manufacture, sale and use of joined fire crackers (series crackers or laris) is banned which is largely demanded during wedding seasons and festivals.

This protest is being arranged to protect and bring life back to this unique Industry, he added.

FTFT will stage a protest to protect the culture and traditions of Indian people, to save the uniqueness of Indian fireworks industry, to sustain the employment of 8 lakhs Tamil Nadu workers and to explain the truth and Genuineness of fireworks trade.