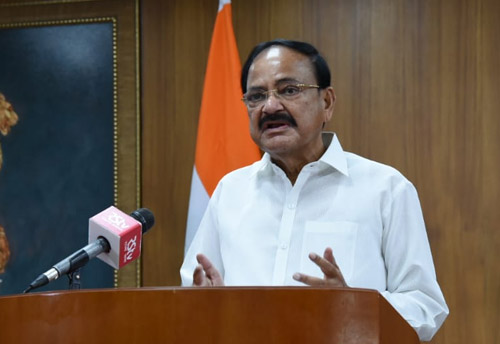 New Delhi, July 6 (KNN) The Vice President of India, M Venkaiah Naidu on Monday called for creating an ecosystem for innovation and entrepreneurship to thrive and urged every Indian to adopt the Atm-Nirbhar Bharat campaign to transform “Local” India into “Global” India.

Speaking at the virtual launch of Elyments mobile App through video conferencing from Upa-Rashtrapati Nivas, the Vice President said the Atm-Nirbhar Bharat Abhiyan was aimed at giving a new boost and a quantum jump to the economic potential of the country by strengthening infrastructure, using modern technologies, enriching human resource, and creating robust supply chains.

Describing Atm-Nirbhar Bharat Abhiyan as a mission to galvanise the forces of growth across the country in various sectors of the economy, he said ''it was a launch pad for fostering entrepreneurship, nurturing innovation and creation of an ecosystem for rural-urban symbiotic development.''

Naidu said the call for Atm-Nirbhar Bharat Abhiyan was not a call for protectionism or isolationism, but for adopting a pragmatic development strategy that would enable the country to recognize and capitalize on its inherent strengths.

Naidu also said that it was quite appropriate that the Prime Minister had announced the ‘Atmanirbhar Bharat App Innovation Challenge’ yesterday in the backdrop of India becoming one of the IT superpowers because of the talented scientists and technology experts.

''It would encourage Indian IT specialists to prepare apps for various uses to enhance our quality of life. As the Prime Minister envisages, it would result in world class ‘Made in India’ apps and create an ‘Atmanirbhar App Ecosystem,'' an official statement quoted him as saying.

Appreciating the efforts of more than one thousand IT professionals in creating the indigenous app Elyments, he said the ‘New India’ needs vibrant young thinkers who are willing to experiment and explore.

“We should innovate not just imitate. Innovation is the watchword for the 21st Century. We have all the ingredients for success. We have pioneers who have built global brands in various sectors”, Naidu asserted.

The Vice President said such initiatives by Indian tech industry and professionals were truly praiseworthy as they not only demonstrated India’s prowess in technology but also was a step towards Atm-Nirbhar Bharat.

“I hope this App would prove to be a good desi alternative to the many foreign Apps being used by the people”, he said.

Naidu stressed the need to make India a leading power in every field, be it science & technology, economy, defence or human development.

Talking about the number of internal and external challenges being faced by the country including the COVID-19 pandemic, Naidu said, India is passing through a crucial moment in its history.

“But we should remain resolute in our response to the challenges thrown at us”, he added.

Dedicating the App to the nation on the occasion of Guru Purnima, the Vice reminded the audience of the crucial role of ‘Gurus’ in this transformation towards Atm-Nirbhar Bharat.