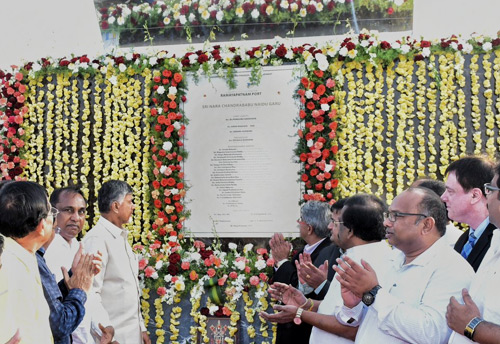 Speaking on the occasion, Chief Minister said Prakasam district as well Andhra Pradesh will witness rapid growth as stone laid for world largest Paper industry and Ramayapatnam port at the same time. He said Ramayapatnam has more number of advantages including proximity to sea cost, railway line and national highway. He expressed confidence that the paper industry and port would transform the economic scenario of Prakasam district and at the same time sought the cooperation of farmers.  He said top priority would be given to farmers’ empowerment. He appealed them not to carried away by false campaign of other political parties.

Earlier addressing the meeting APP executive director Suresh Kilam praised the hospitality of state govt. He said pulp farmers play key role in production of the unit as it is going to be biggest pulp and paper unit in the world.

AP Economic development board CEO J Krishna Kishore welcoming the gathering explained on the prospects of the paper unit and port.

Asia Pulp and Paper of the Sinar Mas group, one of Indonesia’s largest conglomerates and world largest manufacturer of pulp and paper products will  set up a unit in 2500 acres of land located at RAmayapatnam in Prakasam district at a cost of Rs 3.5 billion US dollars providing employment opportunities to 4000 people and indirect employment to 10,000.

With this project over 50000 farmers will benefit by supplying eucalyptus pulp material to the proposed plant resulting in enhancing their income. The plant will be set up in two phases with installed capacity of approximately 5 million MT of pulp, paper and board. The plant will have a captive 300 mw cogeneration plant to meet the power and stream requirements.

Asia pulp and paper a subsidiary of the Sinar Mas group meeting the growing global demand for tissue, packaging and paper products. With its headquarters in Jakarta, Indonesia, APP was founded by Eka Tjipta Widjaja and Singgih Wahab Kwik in 1972. APP has a capacity of more than 18 million tons per annum and 14 major companies serving in 120 countries across 6 continents.

Coming to Ramayapatnam port, the proposed port has an advantage of large backup area and close to the granite export centre. The major advantage of the port is proximity to the existing national highway and south central railway main line. This port is expected to cater to the needs of industries of proposed ports primary and secondary hinterland. The primary hinterland include Prakasam district, Guntur, Kurnool district in AP, Nalgonda, Mahaboobnagar, Rangareddy, Hyderabad in Telangana states. The secondary hinterland include Nellore Kadapa, Chittoor, Anantapur, Krishna in AP and Medak of Telangana, Maharashtra and Karnataka states.

The proposed port is expected to handle granite blocks container traffic and agricultural products as the major exports and coal, fertiliser and edible oil as the major imports.