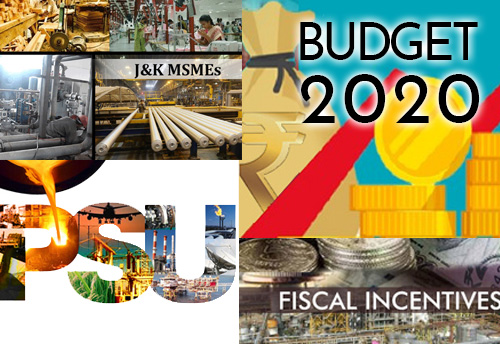 Srinagar, Jan 10 (KNN) Union Finance Minister Nirmala Sitharaman will present the Union Budget 2020 on February 1, at a time when India's economy is suffering and has witnessed one of the worst periods of slowdown in decades.

Several Micro, Small and Medium Enterprises (MSMEs) from various sectors are eying at the budget with a ray of hope that the forthcoming budget might strengthen them to deal with the upcoming challenges which they are facing amid economic slowdown.

Whether the government will be able to sort out all  the issues or not, remains a question, but what the industries in the newly formed Union Territory called Jammu and Kashmir think and what are their expectation from the forthcoming budget, KNN India spoke to one of the MSME associations, known as Bari Brahmana Industries Association (BBIA) there.

While speaking to BBIA Chairman, Lalit Mahajan, it was learnt that the MSMEs in Jammu and Kashmir want their demand of setting up Public  Sector Undertakings (PSUs) to be fulfilled in the next month's budget apart from other issues.

''One of the old demands of ours is to set up a PSU in the state. We have been demanding this from a long time and ironically in the last budget it was given but unfortunately, it hasn't been implemented so far,'' he told KNN over phone.

''Every state has a PSU, but we don't have in our state,'' he claimed.

Speaking more on the same, he asserted, we are not demanding any specific PSUs, the only thing is we need the later here for the betterment of MSMEs in the state.

''Give us fertilizers plant, production unit or give us sugar mill as a PSU. This will help in boosting MSMEs in the state,'' he added.

He emphasized more on the said demand by citing Kapurthala as an example, where he claimed that Kapurthala was nothing before setting up a rail coach factory.

''If mother industry comes here so along with that industry local units will bloom,'' he said.

Further, he said that fiscal incentive and freight subsidy also need to be provided citing that ''Our state is a land lock state and here we don't have a market. We have to import raw material from the other states in order to accomplish our goods, so at least they can give us subsidy on raw materials or on finished goods.''

When being asked about the transport subsidy, he replied, ''So far, here in the state, there is not a single inland depo. Government of India earlier provided a subsidy, asking us to use rail and water ways for transportation but where there is water ways in the state.''

''There is no provision of water ways in the state and as far as the railways is concern then in that case we don't have the infrastructure for that,'' he informed.