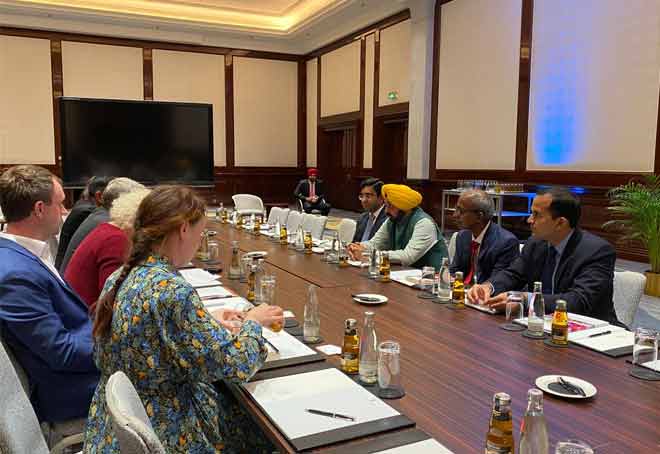 Chandigarh, Sept 17 (KNN) To promote Punjab as a preferred investment destination, Chief Minister Bhagwant Mann is on a seven-day tour to Germany.

Mann on Friday met with the senior representatives of the German Agribusiness Alliance (GAA) and sought support for the sustainable development of the agri-food sector in Punjab.

During deliberations, Mann said that the alliance can provide on-field handholding to Punjab farmers in best practices of crop management. Inviting the GAA partners to Punjab, He said that the Green Revolution led by the state has not only made India self-sufficient in Agri production but also a world leader in various commodities.

The chief minister during his ongoing visit also called on the Founder and CEO of Verbio Vereinigte BioEnergie AG, Claus Sauter, in Berlin and urged the bio-energy giant to explore future collaboration opportunities with Punjab in the renewable energy sector.

“Verbio has a strong association with the state as its Indian subsidiary recently commissioned one of the largest biofuel (Biomethane/Bio-CNG) production units with 33 tonnes per day capacity at Sangrur. The bio-CNG project will produce biogas “by anaerobic digestion process, which is a great way to solve the problem of stubble burning”, he said.

The chief minister will be in Germany till September 18.   (KNN Bureau)