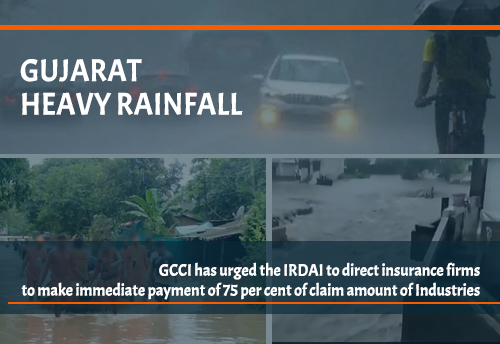 Ahmedabad, July 15 (KNN) Gujarat Chamber of Commerce and Industry (GCCI) has urged the Insurance Regulatory and Development Authority of India (IRDAI) to direct insurance firms to make immediate payment of 75 per cent of claim amount to help Gujarat based companies recover from the loss and damages caused due to heavy rainfall.

The industry body said that it must be considered only if the claim is found to be genuine and correct after completion of the survey.

“While the remaining 25 per cent amount can be disbursed after the documentation is over,” proposed the chamber.

GCCI wrote a letter to Chairman of IRDAI highlighting condition of the State owing to heavy rainfall and flood like situation in certain districts of South Gujarat.

“Many business establishments including shops, retail outlets, industrial units, warehouses etc. have been damaged due to the flood or water-logging situation in these places,” read the letter.

The stock of raw materials, semi-finished and finished goods and machinery in these business establishments have been damaged badly, causing disruption of routine production or selling activities.

“In view of this serious situation, it is necessary for us to support the affected businesses and persons so that these units can be brought back to normalcy at the earliest and the losses to Gujarat's economy can be controlled,” said GCCI.

Requesting to make immediate payment of 75 per cent of claim amount the body said that this will ensure that timely support is made available to the trade, commerce and industry of Gujarat and will help them greatly in restarting their operations at the earliest. (KNN Bureau)