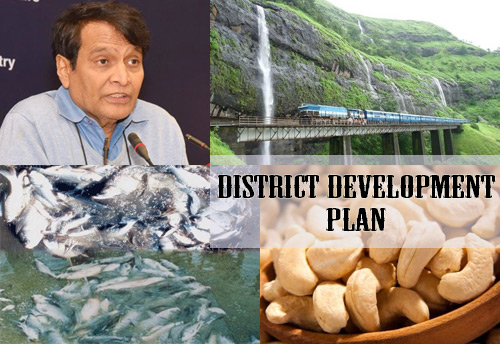 New Delhi, Jan 15 (KNN) For the development of fisheries, tourism, cashew and mango exports and non-polluting industries, Union Minister of Commerce and Industry Suresh Prabhu launched the district development plan for Ratnagiri and Sindhudurg in Maharashtra further to increase overall growth by 3-4 per cent in due course of time.

"If these districts grow by additional 3-4 per cent and the same model is being replicated in other districts, India's gross domestic product will achieve double-digit growth,” said Prabhu.

He said “A holistic plan including infrastructure and human resources requirements such as training has been worked out. An accelerated development plan has been prepared for the coastal districts of Ratnagiri and Sindhudurg.”

Further, he added that the targets is to devise and implement customised growth strategies for districts, focusing on their strengths in niche areas such as services, geographical indications and skills.

For this purpose, IIM Lucknow and National Council of Applied Economic Research (NCAER) have been selected to implement the exercise.

In addition, Indian Institute of Packaging has already designed a packaged product for agricultural products of Sindhudurg and Korean & Japanese companies are very eager to invest in marine product packaging in the district, said Prabhu.

He also informed that the government will do Ease of Doing Business (EODB) mapping for districts to make the environment sustainable for businesses in these districts.

He said “The combined effect of district-level growth targeting and Ease of Doing Business mapping will lead to a transformative change in the economy of these districts as well as that of the nation.”

The six districts chosen will, in turn, become a guiding force for all districts of the country, Prabhu added.