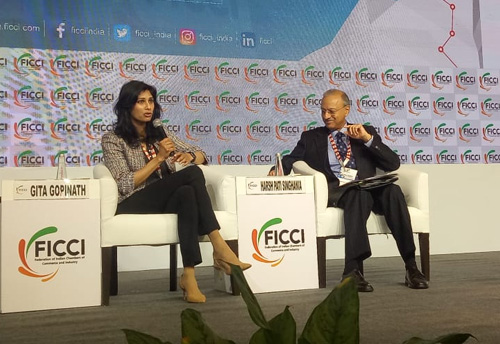 Speaking at FICCI’s 92nd Annual Convention themed ‘India: Roadmap to a 5 Trillion Economy’, Dr Gopinath said that there has been a sharp decline in private investment in the last two quarters and the core problem lies with the financial sector.

She also said that at present the high frequency indicators are signaling that the economy may not revive anytime soon and pointed out that business sentiment in 2014-15 was better than in 2019, and sectors dependent on government have taken a hit.

“Looking at high frequency indicators we are not seeing a revival soon,” she asserted.

“The stress associated with the finance sector, the banks and the NBFCs, is more persistent and is deeper than many projected. The first place to address is the accelerated clean-up of the banks. This will require more institutional infrastructure. So that the insolvency and bankruptcy code, resolution process can happen rapidly. It’s important for banks to be well capitalised,” she avowed.

India-born economist, Gopinath said another source of the problem lies with the rural income growth and noted that direct income support to farmers may not help much till the time productivity of Indian agriculture is raised.

As for whether the current slowdown in Indian economy was cyclical or structural, she said generally both move very closely, particularly for a developing economy that is undertaking deep reforms which are structural in nature. The prolonged weakness in investment needs to be fixed by addressing the problem on financing side, she recommended.

While undertaking reforms is necessary for India, the business community also looks for regulatory clarity and certainty, she said.

''For India’s manufacturing to achieve 25% share in GDP from its current level of 16%-17%, the country needs more reforms particularly in land acquisition and labour laws,'' she said.