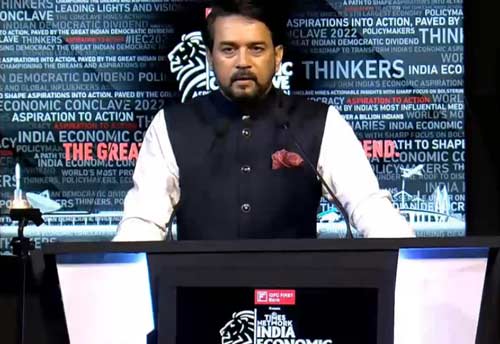 He further said that his government provides social protection to the poor even as it handholds small entrepreneurs and startups.

Thakur said it was the best time to invest in India as the country was on the path of growth and the central government was committed to carry out deep economic reforms going forward. He hailed the Centre's handling of the Covid pandemic that choked the world for two years and said India was vaccinating one Australia a day, much to the amazement of the world.

Thakur also highlighted what the government has done for every section of the society in the past eight years under Prime Minister Narendra Modi. Tax cuts for corporate, welfare schemes for the poor and repealing of archaic laws for ease of doing business and ease of living were some of the key decisions he mentioned were taken.

The Minister said that India now has the third highest number of unicorns in the world, and 47 of them were born during the pandemic.

To encourage manufacturing in India, the minister said the government has introduced the PLI (Production-Linked Incentive) scheme in 14 sectors. "USD 10 billion plan to roll out fab, chip and display industry is a testament to our commitment to making the global supply chain smooth. We are moving ahead with the spirit - 'Make in India, Make for the World'," he said. (KNN Bureau)