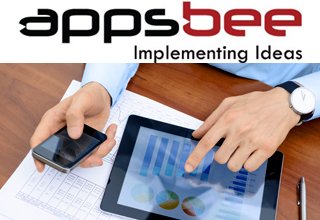 Choosing between job and own business was difficult for the Appsbee founders
Kolkata, Nov 5 (KNN) Appsbee - a Kolkata based consulting company is thriving high on success. Established in 2009, the startup has been successfully providing cloud and mobility solutions to the leading businesses globally.

To learn more about the venture, we caught up with Jayanta Karmakar, the Founder and Director of Appsbee.

“Over the years, Appsbee has succesfully placed itself as a trusted name, behind which we have an ecosystem of global clients, talented resources and world class infrastructure providers,” Karmakar elaborated about the firm.

“We believe the contribution of these three to the company is paramount. The accountability and accomplishment it holds together has helped Appsbee remove the novice tag, and stand successfully as a globally accepted brand. Appsbee is a place where ideas get evolved, nurtured, developed, launched and transformed into business” He added.

Appsbee claims to build smarter businesses, working with entrepreneurs around the world very closely, on their concepts, to build products on mobility, cloud based applications and IOT (Internet of Things). The company has its development centers in Utah, Salt Lake City, United States and Kolkata, India.

Getting to an ongoing with the venture wasn’t a cakewalk for the founders. Karmakar told us during the interview that he had to think of leaving the job and starting the business to give freedom and value to ideas.

It was a risky propaganda but it worked very well for the founders. Appsbee has started its own IoT division last year and has started to do consulting in it.

“Similar to mobile adoption, we the top management guys first bought small electronic devices, put them together and connected them to cloud and mobile. We spent nights for that and we encouraged developers in the organization to shift to IoT division. Now it has been a team and we already at our fourth project on device-cloud-mobile communication project. We can envision, by 2020, 50 billion devices will be connected and communicate to each other. It will be a game changer,” he said further.

Appsbee had to counter both resource and customer based issues. For a developing venture, it’s tough to convince developers to join a small organization with thin wallet. The co-founders were from technology background, and used to work for 18 hours every day to minimize the resource problem.

“Same time, we ourselves brought new sales. We had to do everything starting from sales, human resourcing, accounting, project management, coding and even cleaning.” The founder told us. The hard work of the founders paid off. Now, in Kolkata, people wait for the job posts in Appsbee.

“In recent past we have seen candidates joining our team, leaving Wipro and Cognizant. We have so many reference customers today and its counting,” he added.

The founders washed out all their savings that they could manage during their job in five years. It was never an easy decision to take but the founders were passionate enough about doing it. “We didn’t have a second choice. Later, we never had to look behind,” said Karmakar.

From the third month, the venture started to do profit and that increased fast. Appsbee boot strapped and later the business got self sufficient to fund its members and fund the growth engine.

Appsbee marked its success by closing last financial year with half a million dollar with 45 developers. The startup is expecting to touch one million dollar in revenue with a 66 member team this year.

Although the venture has set a land mark by raising high end profits last year, it still strives to take new challenges and try innovating new things. Appsbee has worked on technologies and have been working on few that large companies even would think twice before getting into.

“We worked on NFC (near field communication), Augmented Reality, SIP server for both voice and video calling, communication encryption using PGP, mobile health, social payment etc. These all were new to us but we have a great team to take challenges and we successfully delivered. It’s fun here to work on new things,” said Karmakar.

The founder believes on concentrating quality of the team members and adding more technology edge rather than holding an army of people. Karmakar is quite optimistic about making Appsbee  the best service provider in the world in mobility and cloud space.

“We are looking forward to create awesome product like whatsapp or probably a personal assistant robot in IoT space. We will focus in doing one/two of our own product in next two years too. We will keep day dreaming and will create something that never happened in this world. We don’t want to be just another Indian service provider,” the founder said while elaborating about the vision for the venture.

Karmakar said Appsbee itself hasn’t relied upon the government for any support. But the founders strongly believes that the new Government is making many positive changes for betterment of emerging enterprises but probably it will take some time to receive direct benefits. (KNN/ J)
Share