New Delhi, Feb 18 (KNN) As 1.21 Billion Indian population offer flowers in Temples, Mosques, Gurudwaras. Showering flowers is a religious ritual in India. As per the customs, these flowers are a symbol of devotion and reverence and thus it is believed that flowers should be discarded in rivers to respect their sanctity. But these flowers create a devastating impact in the ecosphere of water bodies. This led the founders of 'HelpUsGreen - a start-up venture - work in the sphere of recycling flowers offered during worship and turns them into plant fertilizers, vermicompost, luxury incense and bathing bars.

Based in Kanpur, HelpUsGreen has marked a significant contribution in the area of sustaining the aquatic ecosphere and reducing water pollution via their convincing efforts.

In an interview with Ankit Agarwal, Co-founder of HelpUsGreen, KNN learned more about these manufacturers of eco-friendly organic products, throwing a light over their journey so far.

“These sacred flowers offered to deities’ rot- killing fishes and creating havoc in fragile ecosphere of water body and cause enormous pollution. The pesticides and chemical fertilizers used to grow flowers mixes with the river water making it highly toxic. Every year about 8,00,000 tons of flower waste id dumped in Indian rivers choking them to death,” Ankit said talking about the catastrophe caused by wasted flowers.

“At Helpusgreen, we collect these auspicious flowers directly from their place of worship and pampering them with our secret recipe. We added Earthworms to eat up the flower waste to produce vermicompost which is the best organic matter available for plants. Hence our product "Mitti" was formed” Ankit told us.

“Mitti is a power packed shot of mineral rich nutrients and enzymes that energises the soil in your gardens and homes. From its source to the end, ‘Mitti’ is an 100% natural product that is made using natural processing so that it has zero carbon footprint and remains free from all forms of chemicals and carcinogens. Mitti is a safer, smarter alternative to chemical fertilizer .Plants grow healthier and greener with Mitti, leading to better flowers, fruits and vegetables,” he added further elaborating about their product.

Ankit was pursuing his Masters in Innovation Management from Pune, when he and his co-founder, Karan Rastogi became attentive  towards the non attended flower heaps lying at the Parmat temple in Kanpur and their disposal in river Ganges.

“Somehow this became the focal point of our discussions and i took it up as a class project.  Two years later when I decided to move back to Kanpur we decided to do HelpUsGreen” Agarwal enlightened us about the idea for the venture.

The target audience of HelpUsGreen is mainly Switzerland and Germany, the reason being the produce quantity is less and the profits in these Geographies are high.
“Contacts from the organisations we have worked for came in handy. We don’t want people to buy our products just because “yeh Ganga ke phool se bana hai “but because of its quality” the cofounder said.

“We have a niche clientele – Contrary to our commercial counterparts available in the market our Incense sticks – Sticks & stones are free from carcinogen coal.  People buy sandalwood flavour agarbatti priced at Rupees 30 from the market. Sandwalood oil costs more than a lakh for a kilogram.  A little math and you’ll know you are just buying chemicals. Our incense sticks are hand rolled and use the old school dipping method. Sticks and Stones  are dipped in pure essential oils sourced organically” he further added.

With the launch of Yagya, HelpUsGreen has debuted in the Indian online channels in September .Sales from major Indian Ecommerce sites contribute to two percent of the total sales.

The start-up generates its revenue by selling the products manufactured .Major part of the total produce is being exported. “However, when faced with a low demand, we bootstrapped” said Agarwal.

The operation for the company was initially based in the backyards of the founders. As per the interview, the start-up has been a legal entity since May.

The founders form the core team, along with three other people to help them expand. The founder disclosed that the workforce comprises of underprivileged women, another significant feature of the start-up.

HelpUsGreen is in collaboration with some notable entities like Webchutney Dentsu, Browntape Ecommerce, Net impact and Oikos Chapters in Asia. Apart from these collaborations , HelpUsGreen has been in partnership with a Switzerland based composting  company and a physical store in Milan is in process.

Based on the unique idea of ‘flowercycling’, HelpUsGreen hasn’t faced any competition in the market as of now. The founders, however, aspire for some competition. “But I guess we’d be happy if have some competition at least people will start talking about this issue. The volume of flowers cannot be handled by us alone – We want clean Ganges. We would roll out our expansion model soon to make more entrepreneurs along the Ganges line” the Entrepreneur told us.

“The high supply demand gap, use cases, social impact and the trendy product design makes the market apt for HelpUsGreen” he further added.

In next five years HelpUsGreen is planning to centre along the Ganges line.

Immediate Goals of the start-up includes setting up a physical store in Milan, strategic partnership with Institutes, launching the soaps and covering 2200 kilograms of flowers daily in Kanpur.

The founders are also planning to begin partnership with Wormup.ch, Zurich along with scaling their operation in Vanarasi and Allahabad.

Disclosing the long term goals for their venture, Agarwal said, “We are looking forward to Investing in full stack model and start research on Styrofoam. Also, we would like to scale up to – Haridwar, Patna, Kolkata and Special Care Units along the Ganges. We are also looking forward to acquire Fair trade license”. (KNN/ Jyoti) 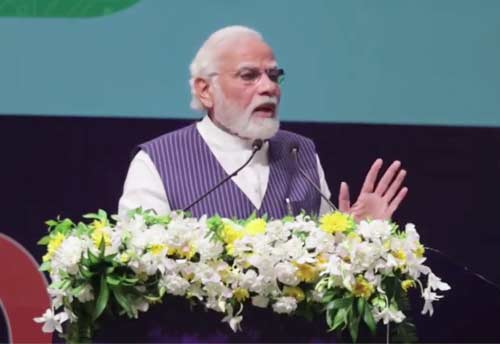