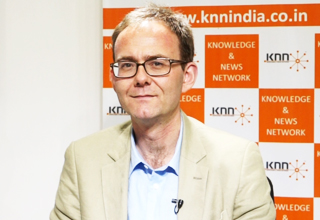 UK city of Test Matches, wants Indian SMEs join supply chain of Nottingham firms
New Delhi, Jun 21 (KNN) Nottingham, one of the eight “core cities” of Britain outside London  with a  large number of big corporates in transport, aerospace and clean technology,  wants to ambitiously engage  with India. Significantly, the city which has access to 90 per cent of British population within two hours of journey would like Indian SMEs to become part of the supply chain of the global companies located in and around Nottingham.

In an interview with Knowledge and News Network, Director (Economic Development) Nottingham City Council Chris Henning said “…The idea would be to connect manufacturing companies here into those which have large supply chain needs and are looking for solutions for all over the globe”.

After a wide-ranging discussion between Nottingham City Council visiting delegation and the Federation of Indian Micro, Small and Medium Enterprises (FISME) here earlier this week, Henning said, “we would help if Indian manufacturers are looking to expand, looking to get close to that supply chain, maybe, in transport, aerospace and clean technology”.

He said Nottingham with two of its strong universities can also help the Indian SMEs and engage with them in the area of intellectual property rights.

Nottingham with a population of one million is strategically located as 90 per cent of the British population is within two hours of journey. The city contributes a tidy 12 billion Pound to the GDP of British economy.

Like in rest of UK,   Indians have established their presence in Nottingham as well. “We have thousands of businesses including hundreds of Indian-owned businesses. They are in IT, life science, engineering and professional services,”  said Henning who has been interacting with various Indian industry groups, academia and government officials in Delhi and Punjab seeking investment  and more mutual commercial engagement.

He said the University of Nottingham and other such institutions in the city can share their intellectual property with the Indian SMEs. “It is more important in this world to do research and development to stay ahead of your competitors. We have two very strong international universities which are at the forefront in terms of engaging with businesses and with the SMEs to make sure that the intellectual property within the university is connected with the business and the aspirations of those businesses”.

An official from the University of Nottingham was part of the delegation which called on Vice Chancellor of the Punjab University Arun Grover.  The discussions centred around the potential collaboration between the two universities. “That is an excellent and interesting way we can explore going forward in the world of academic and industrial collaboration…”

Nottingham city which has won several awards for public transport – bus network or trams, is also keen on exploring opportunities in Indian cities. “We have developed a lot of expertise in this regard which we would be delighted to share with Indian government and the private sector companies as well”.

Besides economic cooperation, India has a strong sporting relationship with Nottingham.  There is always a cricket test match at Trent Bridge which will hosting the Indian team in July as well. (KNN/PC)