BRICS nations contribute 50 per cent of the economic development of the world: PM Modi 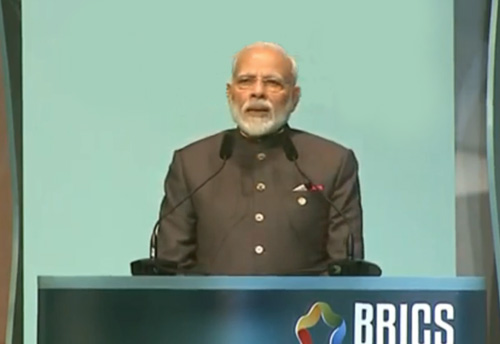 BRICS nations contribute 50 per cent of the economic development of the world: PM Modi

Addressing the closing ceremony of the BRICS Business Forum, PM Modi said the grouping of five countries had led to economic development despite the global economic slowdown.

"India is the world's most open and investment friendly economy due to political stability, predictable policy and business friendly reforms," Modi said.

"BRICS countries account for 50 per cent of the world's economic growth. Despite the recession in the world, BRICS countries accelerated economic development, brought millions out of poverty and achieved new breakthroughs in technology and innovation," he said.

PM Modi said that the "diversity between our member nations is another important factor" that can contribute to boosting trade ties.

For example he said if one country in BRICS has advanced technology, other has abundant raw material or market. BRICS countries have opportunities in sectors Electric Vehicles, digital technology, fertilizer, agriculture produce, food processing etc.

He suggested that a proper mapping of this should be done and by the next BRICS Summit atleast five sectors should be identified in which joint ventures can be formed and investments can be done.

The prime minister also thanked President of Brazil Jair Bolsonaro for his government's decision to give Indians visa-free entry in the Latin American country.

PM Modi is in Brazil for the 11th BRICS Summit which will focus on building mechanisms for counter-terrorism cooperation and strengthen India's ties with the world's five major economies.