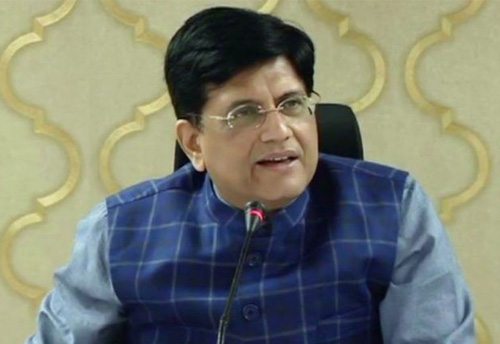 New Delhi, Aug 10 (KNN) The Union Minister of Commerce and Industry and Railways, Piyush Goyal, will lead a delegation of Chief Ministers of States and business representatives to Vladivostok in the Russian Far East from August 11 to 13, 2019 to explore investment opportunities and strike close partnerships with the Far East provinces.

The delegation includes Chief Ministers of Goa, Gujarat, Haryana, and Uttar Pradesh and an official from the State of Assam. The Chief Ministers of States will be accompanied by business delegations who will engage with officials and businessmen from the provinces in Russia’s eastern most territory.

The Commerce and Industry Minister’s visit is a precursor to the visit of the Prime Minister, Narendra Modi to Vladivostok in early September for the 5th edition of the Eastern Economic Forum where he will be the chief guest for the 20th edition of the Forum.

It is an international forum held every year in Vladivostok, Russia, to support the economic development of Russia’s Far East region and to expand international cooperation in the Asia-Pacific region.

This visit by Piyush Goyal will set the stage for further strengthening of bilateral ties between the two countries and also see major announcements on collaborative projects for the economic success of the Far East region of Russia.

India is looking to gain from the investment-friendly Russian stance in the natural resource-rich region, which includes significant incentives and tax breaks allowing Indian investments and labour for projects.

Indian entities are already engaged in key sectors like power, coal, oil and gas, and this visit by India’s Commerce and Industry Minister, along with the delegation, will increase India’s footprint in the region further.

The delegation includes more than 125 representatives from business stakeholders, who will interact with Russian counterparts on opportunities in the mining and processing of diamond and other rare metals, railways, agriculture, fisheries and food processing, oil and gas, forestry and timber, coal and power, ceramics, tourism, ship building, technical education, healthcare, and pharma sectors and Ayurveda.

Commerce and Industry Minister will also explore new areas of cooperation and ensure that India’s participation at the Eastern Economic Forum is meaningful.

The delegation accompanying Piyush Goyal will identify and scope out and work on potential areas of business collaboration in this region of Russia. Russia’s Far East offers an important area for use of India’s skilled man power to develop the region that is vast and under populated.