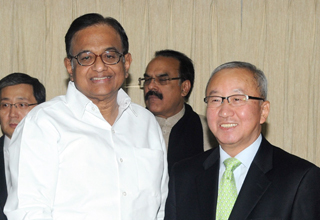 Both sides exchanged views on macroeconomic outlook and policy directions and measures necessary to reinforce cooperation under the multilateral framework and appreciated the deepening and developing bilateral economic cooperation.

In order to enhance trade relations, both sides further agreed that, in case either customs authority notifies its counterpart of difficulties encountered in the process of customs clearance, the two authorities will make efforts to address the difficulties expeditiously.

They also decided to strengthen cooperation in trade by means of the Master Interbank Export Credit Agreement, worth USD 200 million, between the Export-Import Bank of Korea and State Bank of India. The pact is to be signed this month.

The measures being undertaken by the Indian government to improve investment climate include liberalisation in the FDI regime, promotion of exports, banking reforms, deepening of financial markets and fiscal consolidation.

The two countries underscored the need to evolve a vision for medium and long-term cooperation between them for systematic and close bilateral cooperation. They agreed that identified research institutes of the two countries would jointly discuss this subject.

Acknowledging that the India-Korea Comprehensive Economic Partnership Agreement (CEPA) has contributed to enhancing trade and investment flows, the two economies agreed to continue their consultations on the pact.

While addressing the 4th India-Korea Finance Ministerial Meeting in the national capital, Finance Minister P Chidambaram asked the South Korean companies to take advantage of the investments opportunities in the Indian infrastructure sector.

"Since the country's growth potential is around 8 per cent, several steps have been in the recent months to reverse the economic slowdown, rein in the fiscal stress and improve investment climate," he said.

"Both sides agreed to make an effort to conclude the revision of the Korea-India Double Taxation Avoidance Convention (DTAC) expeditiously after reviewing their respective positions on major pending issues for the revision," said the minutes of the Fourth India-Korea Finance Ministerial Meeting.

The two nations agreed to consider issuing licences for establishing bank branches and offices in each other's country, it added.

The next bilateral meeting would be held in Korea. (KNN Bureau)