India & Germany to collaborate on AI based startups, local industries for R&D 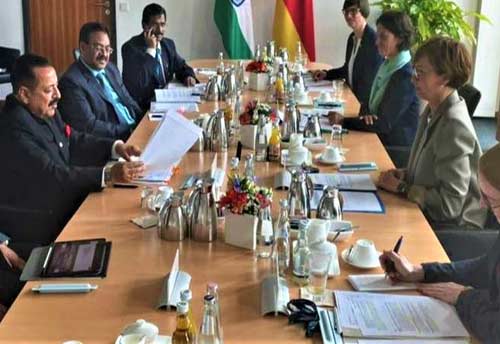 India & Germany to collaborate on AI based startups, local industries for R&D

New Delhi, May 4 (KNN) India and Germany have agreed to work together in the domain of  Artificial  Intelligence (AI). As part of the collaboration, the two sides will work together to advance AI-based startups and research.

The announcement is part of the overarching cooperation between the two sides in science and technology. The two governments have roped in academic institutions and local industries to further strategic research and development in the AI arena.

The two countries will also jointly work to foster a higher degree of application of AI in sustainability and healthcare. The announcement was made at the sidelines of a meeting between Minister for Science and Technology and Earth Sciences Jitendra Singh and his German counterpart Bettina Stark-Watzinger.

At the meeting, both ministers agreed for greater cooperation in the field of AI.  It was also announced that a proposal will soon be floated to invite suggestions from researchers and industry in this regard.

Singh also said that India and Germany are working together in newer areas of technology such as electric mobility, quantum technologies, green hydrogen fuel, among others. He further proposed ramping up joint cooperation in these areas to leverage the two country’s strengths.

Highlighting the government’s achievements, Singh said that the Centre was focused on ‘promoting the value chain of innovation, entrepreneurship and IP generation’. (KNN Bureau)