Innovation & quality a must for South-South Development Cooperation: DGFT 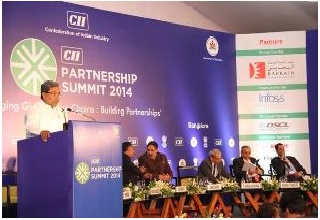 Innovation & quality a must for South-South Development Cooperation: DGFT
New Delhi, Jan 31 (KNN) Director General of Foreign Trade Anup Pujari has emphasised the need for quality and innovation between developing countries to go together.

During a plenary session on “South-South Development Cooperation: The Role of Emerging Economics”, held at CII Partnership Summit organised in Bangalore recently, Pujari asked the CII Institute of Quality and the CII Institute of Innovation to work together with various countries to ensure the maintenance of honesty in both product and service sectors, said a report.

He stressed the importance of building trust among the developing countries in order to increase the level of South-South Cooperation.  He also mentioned that international arbitration pertaining to trade is being misused by some states.

The developing countries need to carefully negotiate with the western world. So the challenge before the South countries would be to sustain and enhance their growth and development by focusing on domestic demands and much greater interaction within the South.  (KNN Bureau)