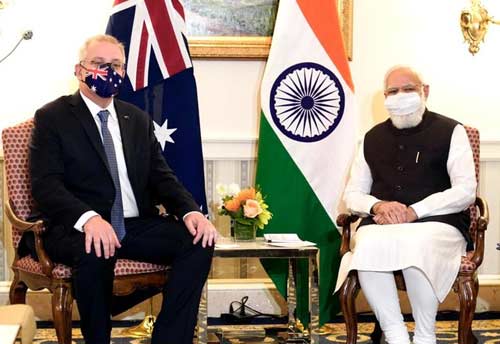 This was the first in-person meeting between the two leaders in the post-pandemic period. During the meeting, the Prime Ministers discussed a broad range of issues of bilateral, regional and global importance.
They noted with satisfaction the regular high-level engagements between the two countries, including the recently held first India-Australia Foreign and Defence Ministers’ 2+2 Dialogue.

The Prime Ministers reviewed the progress achieved since the Leaders’ Virtual Summit in June 2020 under the Comprehensive Strategic Partnership and resolved to continue close cooperation for mutual well-being and towards advancing their shared objective of an open, free, prosperous and rules-based Indo-Pacific region.

In that context, they welcomed the visit to India by former Australian Prime Minister Tony Abbott as PM Scott Morrison’s Special Trade Envoy for India, and noted the commitment of both sides to achieve an early harvest announcement on an interim agreement by December 2021.

The Prime Ministers agreed that as two vibrant democracies in the region, the two countries needed to work closer together to overcome the challenges in the post-pandemic world, inter alia to enhance supply chain resilience.

Both leaders lauded the immense contribution of the Indian diaspora to Australia’s economy and society, and discussed ways to enhance people to people ties.

Ministry of MSME calls for suggestions on trade with Sweden, Columbia

Dubai to invest in infrastructure, help industrialization of J&K

Ministry of MSME calls for suggestions on trade with Sweden, Columbia

Dubai to invest in infrastructure, help industrialization of J&K