US files dispute case against India over DCR in solar production 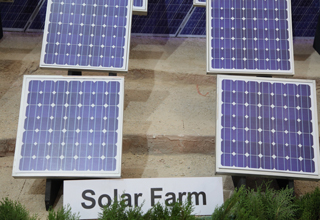 “In a communication received on 11 February 2014, the United States notified the WTO Secretariat of a request for consultations with India concerning certain measures relating to domestic content requirements for solar cells and solar modules. The measures correspond to Phase II of the Jawaharlal Nehru National Solar Mission programme,” said a WTO news item yesterday.

“The claim states that India provides less favourable treatment to imported solar cells and solar modules that that accorded to like products originated in India and they are trade-related investment measures inconsistent with India's obligations under the GATT,” WTO said.

The complaint has to do with India’s domestic content requirement:  “Out of the total capacity of 750 MW under Batch-I Phase-II, a capacity of 375 MW will be kept for bidding with Domestic Content Requirement (DCR). Under DCR, the solar cells and modules used in the power plant must both be made in India. The developers at the time of bidding may opt for either “DCR” or “Open” or both the categories. The Developers will submit separate Bids in case they wish to bid under both the categories,” the RFS (Request for Selection) document for 750 MW grid connected solar photo voltaic projects under JNNSM Phase II Batch I. document said.

On 20th January the Solar Energy Corporation of India (SECI) opened bids for the 750 MW Solar projects to be allotted under the JNNSM Phase II Batch I.

The Cabinet Committee on Economic Affairs last year had approved the implementation of a scheme for setting up of 750 MW of Grid-connected Solar PV Power Projects under Batch-1 of Phase-11 (2013-17) of the Jawaharlal Nehru National Solar Mission (JNNSM) with Viability Gap Funding (VGF) support from the National Clean Energy Fund (NCEF).

The estimated VGF requirement for the scheme is to the tune of Rs. 1,875 crore at the rate of Rs.2.5 crore/ MW. The VGF scheme will facilitate setting up of the 750 MW grid connected solar power projects, in mainly the private sector on Build, Own and Operate (BOO) basis at various locations.

The request for consultations formally initiates a dispute in the WTO. Consultations give the parties an opportunity to discuss the matter and to find a satisfactory solution without proceeding further with litigation. After 60 days, if consultations have failed to resolve the dispute, the complainant may request adjudication by a panel.  (KNN/ES)